'More Probable Than Not' That Patriots Deflated Footballs 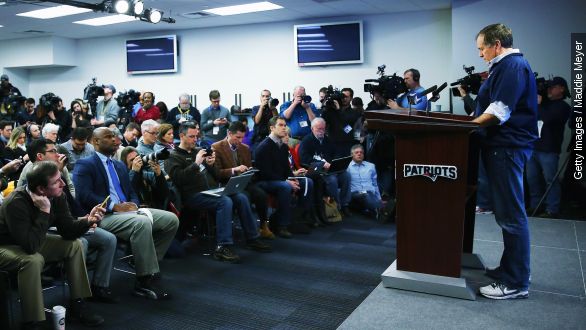 SMS
'More Probable Than Not' That Patriots Deflated Footballs
By Jamal Andress
By Jamal Andress
May 6, 2015
Lead investigator Ted Wells concluded "it is more probable than not" that the Patriots deliberately deflated footballs before the AFC title game.
SHOW TRANSCRIPT

After more than three months, the NFL has published the findings of the now-infamous deflategate scandal.

The New England Patriots went under investigation back in January to determine if someone on the team deliberately deflated the footballs the Patriots used in the AFC title game against the Indianapolis Colts and if so, who knew about it or approved it. (Video via ABC)

Lead investigator Ted Wells, who also conducted the investigation into the Richie Incognito scandal for the NFL, concluded "it is more probable than not" that the Patriots did deliberately deflate the footballs before the game. He also wrote that Tom Brady was "generally aware" of what was going on. (Video via Due Process TV)

The report also outlines a series of particularly damning text messages among Patriots employees, who Wells says are responsible for deflating the footballs: Jim McNally, attendant for the Patriot's officials locker room, and John Jastremski, equipment assistant for the Patriots.

As for the Super Bowl champs in question, Patriots owner Robert Kraft seems particularly defiant in his response to the report, which was published shortly afterward:

"I stated that I unconditionally believed that the New England Patriots had done nothing inappropriate in this process or in violation of the NFL rules and that I was disappointed in the way the league handled the initial investigation. That sentiment has not changed."

NFL Commissioner Roger Goodell issued a statement but did not say whether the team would face disciplinary action.