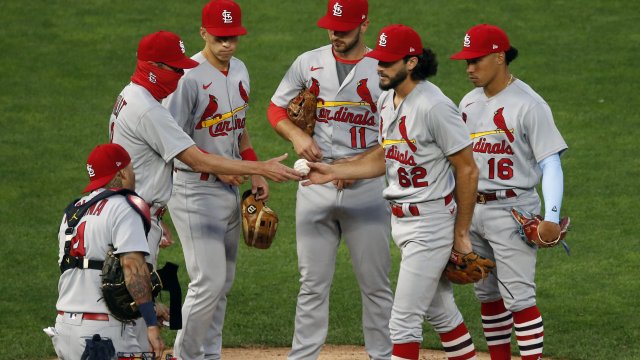 SMS
Positive COVID-19 Tests Postpones Another MLB Game
By Joshua Kranzberg
By Joshua Kranzberg
July 31, 2020
On Friday, 6 teams — 20% of the league — aren't playing because of positive tests or their proximity to teams that tested positive.
SHOW TRANSCRIPT

Earlier this week, on the heels of more than a dozen positive COVID-19 tests among Major League Baseball's Miami Marlins, Commissioner Rob Manfred said in an interview "I don't put this in a nightmare category."

But heading into the second weekend of games, it's looking more and more like that for MLB. Friday morning, ESPN confirmed that a game between the St. Louis Cardinals and Milwaukee Brewers was postponed and rescheduled because of multiple positive tests on the Cardinals.

With Friday's postponement, that means that 6 teams — 20% of the league — was not playing because of either positive tests or their proximity to teams that tested positive.

Major League Baseball was the first team sports league to try travel among teams. The NBA, WNBA, NHL, MLS, and the National Women's Soccer League all adopted a "bubble" strategy, sequestering every team and player involved in a city for weeks.

And that strategy appears to be working. The NWSL just completed its Challenge Cup tournament. Granted, an entire team had to withdraw early on because of multiple positive tests. But after that, it went off without a hitch.

The NBA just resumed their season and has reported zero positive tests, and the NHL has boasted the same.

Newsy's Austin Kim spoke to Dr. Kathleen Bachynski, an assistant professor of public health at Muhlenberg College. She said while the bubble approach isn't perfect, it's a better option than what MLB is trying to accomplish.

She said, "I do think the hub city and bubble approach is much more likely to work and so far is working much more effectively than an approach that involves travel. i think especially because there's quite high rates of community transmission right now in a lot of regions of the united states, it's just adding significant additional risk to start having people traveling across regions, and i think this sort of bubble approach where players and staff are remaining in one location is a lower risk way to go."

With MLB's travel strategy not working out so far, it's raising more and more questions about the only sport we haven't discussed here...football. While college conferences are trying to limit travel by imposing only games within their conference this season, MLB's troubles aren't good signs for college football or the NFL.