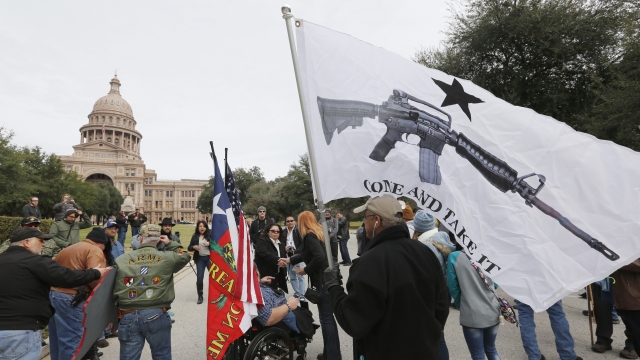 With El Paso grieving after Saturday's mass shooting, Texas is set to loosen its gun laws.

To be clear, the nine new pro-gun laws due to go into effect on Sept. 1 were passed by the Texas Legislature and signed into law by Gov. Greg Abbott well before the El Paso shooting spree that killed 22 people and wounded 26 more.

The new laws draw attention to Texas' place as one-of the most gun supportive states in America, already with permissive laws for both concealed and open carry of handguns, and with no licenses required to carry rifles.

Here's what some of the new laws will do: One will remove previous limits on the number of teachers and staff allowed to carry guns at public schools. Another will ban landlords from restricting tenants' possession of firearms and ammunition. And another will ease rules on possessing guns in churches or other houses of worship.

Before the El Paso shooting, Texas was home to three of America's 10 worst mass killings, recorded in these grim headlines. Sixteen people died in a 1966 shooting spree by a sniper at the University of Texas; 23 people perished in a 1991 rampage at a Luby's Cafeteria in Killeen; 26 people were killed two years ago at the First Baptist Church in Sutherland Springs. Now El Paso is the latest on the list.

Kris Brown is president of the Brady United group that advocates for stricter gun laws. She blasted the new laws, which were passed after the Sutherland Springs shooting as well as a 2018 school shooting that killed 10 people in Santa Fe, Texas.

Brown accuses Texas lawmakers of doubling down "on an NRA-led agenda to encourage guns everywhere, no matter the risks and costs to safety."

For its part, the National Rifle Association offered its "deepest sympathies" for families of victims of the El Paso and Dayton Ohio shootings. It said: “We will not participate in the politicizing of these tragedies but...will work in good faith to pursue real solutions that protect us all."