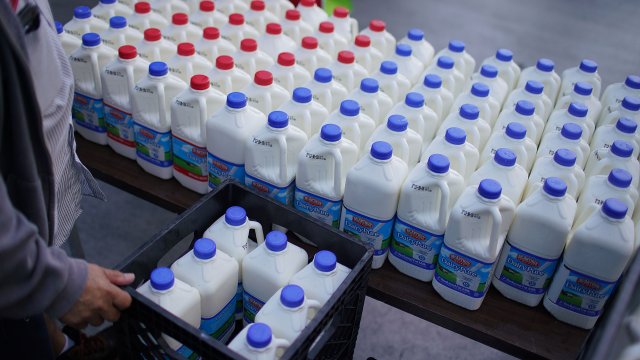 It's nuts what foods can be turned into milk.

What's with all the options? And what's the best one?  There's a growing demand for alternative milk. Market analysts found a 61% burst in sales between 2012 and 2018. Some of the reasons: The popularity of veganism, more and more people who are lactose intolerance, animal welfare and concern about the environment.

The nutritional benefits are another biggie. Take almond milk (the market leader) for example.NIH notes that almonds have a high concentration of monounsaturated fatty acids thought to help weight management and reduce bad cholesterol. Plus, the nuts have proteins, fiber and vitamin E.With so many options out there we've seen a disruption in the milk aisle.  Marketwatch reports  millennials' "consumption habits" are a key factor. They are buying fewer dairy products than their parents or grandparents. Around the globe, consumers are doing the same. Asia Pacific, for example, accounted for over 50 percent of the alternative market in 2017. That's because a large majority of Southeast Asians are thought to be lactose intolerant.

The worldwide non-dairy milk market is expected to reach $38 billion by 2024 as cow’s milk loses customers. Still,the cow variety accounts for 85% of the market and most households that buy alternative options also buy the traditional "whole" or "2%" we grew up drinking. With an eye to the future, some legacy dairies are dipping into both pails. Supermarket News reports that Dean Foods, the largest milk bottler in the U.S., now invests in a company making things like plant-based french onion dip.This brings us to one last question. Is it spelled mylk or milk? It depends. The Urban Dictionary explains that mylk refers to plant-based or alternative milks.

The FDA, which has a little more pull, states "Milk is the lacteal secretion obtained by the complete milking of one or more healthy cows."

Cashews don’t quite qualify for that. But customers will have the last word on which fluids fill the jugs of the future.