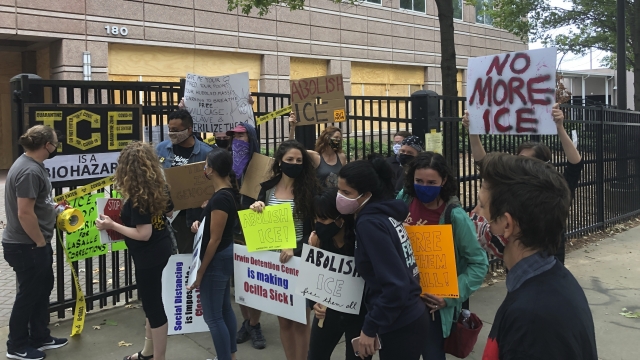 At least 19 migrant women held at Irwin County Immigration Detention Facility in Georgia have come forward with claims of medical abuse against a doctor, according to new reporting from the L.A. Times. The women say Dr. Mahendra Amin performed overly aggressive or "medically unnecessary" procedures without their consent or pressured them into it, including procedures affecting their ability to have children. The doctor denies the allegations. Last month, a nurse at the immigration jail drew national attention when she claimed that many detained women had been sterilized against their will. While she did not name the doctor in her whistleblower complaints, soon after, many of the detained women and their lawyers named Amin as the doctor who performed the surgeries. While Amin denies the allegation, Pauline Binam said through her lawyer, Van Huynh, that Amin removed one of her fallopian tubes without her consent. The doctor initially said she had a cyst, her lawyer said, but when Binam woke up after the operation, he informed her that he had also removed a fallopian tube."While she's sitting in a wheelchair, she breaks down crying," the lawyer said. "It's possible that she may not be able to easily conceive in the future. Huynh said Binam did not consent to such a major operation and would not have consented had she been informed beforehand. ICE announced a few weeks ago that it would no longer refer women at Irwin to Amin anymore, and he's currently not practicing at the facility. Multiple investigations into the allegations are currently underway, including from Congress and the Department of Homeland Security. The revelation of these 19 new allegations came from a report prepared by medical experts for Congress.