More Countries May Be Exempted From Steel And Aluminum Tariffs 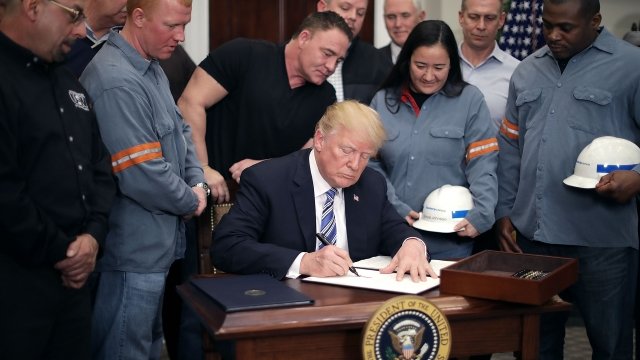 SMS
More Countries May Be Exempted From Steel And Aluminum Tariffs
By Jake Jones
By Jake Jones
March 10, 2018
President Donald Trump already temporarily exempted Canada and Mexico, and he's signaled Australia might be next.
SHOW TRANSCRIPT

American allies are lobbying Washington, D.C., in an effort to be exempt from President Donald Trump's steel and aluminum tariffs.

His plan originally called for blanket import tariffs. Trump later said he would temporarily exempt Canada and Mexico but tied that deal to NAFTA renegotiations.

After he signed the tariffs, he signaled Australia might have negotiated an exemption after a full-press lobbying effort. South Korea is reportedly trying to follow suit. But that puts those allies at odds with the European Union, which originally planned to retaliate with tariffs on American goods.

The U.K., too, broke with the bloc and is lobbying for an exemption of its own.

EU officials may challenge Trump's tariffs at the World Trade Organization, but that could be a long, drawn-out process. It could also backfire; Trump named national security as part of his justification for the tariffs, something the WTO has been reluctant to rule against.