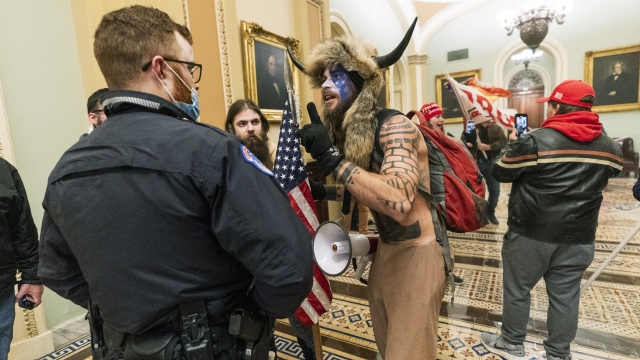 Four more people have been arrested for their part in the U.S. Capitol riots.

More people are being arrested and charged for their alleged roles in the riots at the U.S. Capitol Wednesday.

Among those arrested was the man suspected of removing Speaker of the House Nancy Pelosi's lectern. Adam Johnson of Florida was charged with theft of government property, violent entry and disorderly conduct.

Also facing charges is Jacob Anthony Chansley of Arizona. The well-known QAnon conspiracy theorist was seen carrying a six-foot spear and wearing a fur-lined headdress, face paint and horns during the riot. Doug Jensen, who was identified wearing a QAnon shirt over a sweatshirt to the riot, was also arrested by the FBI.

Authorities in D.C. relied on media reports to identify the suspects. Prosecutors say Johnson was identified through a circulating Getty Image, while investigators matched Capitol photos of Chansley to his social media accounts.

Officials said Chansley called the FBI Thursday. They said he confirmed he was the man in the headdress, saying he came, "at the request of the President that all 'patriots' come to D.C. on January 6, 2021."

Meanwhile, a West Virginia Republican lawmaker is also facing charges. Derrick Evans recorded a Facebook Live video of himself inside the Capitol during the unrest. But he denied taking part in destruction or violence. He later deleted the clip, but not before it had already been widely shared on social media and aired on TV.

So far the Department of Justice says 13 people face federal charges in connection to the riot, as investigations continue into likely additional criminal counts against other suspects.