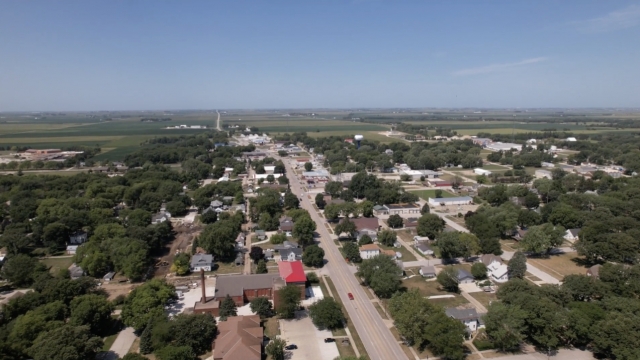 A number of factors from inflation to the pandemic are impacting where people choose to live.

"So, this is Main Street," Quentin Swanger, a resident of Sac City, Iowa, said.

Those who live in small towns live here for a reason.

"It's a small town, easy living, low stress," he said.

This is a slice of rural America, once the sign of opportunity and the dream of many Americans. Now, these rural towns see a number of challenges.

"Small rural areas have faced a lot of issues, mostly surrounded with population decline. It has been going on for decades," Steve Irwin, who was born and raised in Sac City and now works at the local Iowa State Bank, said.

Sac City is two hours from Des Moines, one of the closest urban centers.

"We've had this decline going on for a long time. Sac City's peak population was like 3,300 and now we're about 2,000," Irwin said. "The goal of, at least our community, is let's try to stop the decline before we worry about increasing our population."

This is happening all over the country. Rural sociologist David Peters said recent high inflation and pandemic stresses haven't helped.

"Towns two, three hours away from a city are not growing," said Peters, a professor of rural sociology at Iowa State University.

While headlines during the pandemic said more Americans were moving out of urban centers, Peters said that's not always the case everywhere. He leads the Iowa Small Towns Project.

"The red dots represent decline, and the size of the dot represents the rate of that decline. And the blue dots represent growth," he said, pointing to a map that shows the population changes since 2000.

The Small Towns Project survey has been researching the challenges small communities, especially those in the Midwest, have faced for decades.

And now, he said, he's seeing even more pressure.

This year, Peters found expenses for Americans living in rural areas increased 9.2%. Their earnings only increased 2.6%.

One of the biggest issues is the availability of housing, Irwin says.

But the residents of Sac City want to change that narrative by increasing amenities and public art installations, for example, to bring attention to their town.

"We are fighting from a development standpoint to fight that fight, the depopulation, to not only have people come into town but to get them to stay here and hopefully start a family," Swanger said.