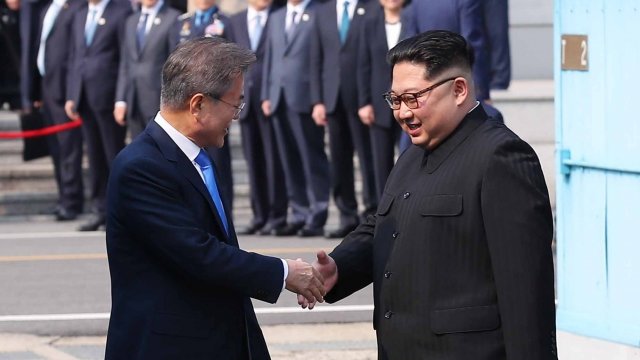 The historic meeting between South Korean President Moon Jae-in and North Korean leader Kim Jong-un went off without a hitch.

The two leaders met Friday morning, local time, in Panmunjom, a village that splits the border between the two countries. They met at the Peace House, which is on the South Korean side.

Three main items were on the agenda: denuclearization, a peace treaty and improved relations between the two countries.

And it appears they made progress on each item.

Moon and Kim signed a declaration stating there'd be "no more war on the Korean Peninsula" and that they'd agreed to "completely cease all hostile acts against each other."

And although CNN reports Kim didn't explicitly mention denuclearization while addressing the media Friday, the declaration states the two sides did agree to it.

The two leaders also agreed to hold high-level military talks in May and host reunions of families split by war and the division of their countries. Moon will also schedule a trip to North Korea for this fall.

This was only the fifth round of high-level talks between the two rival countries in the past 40 years. Up next in this diplomatic dance, the expected meeting between President Donald Trump and Kim Jung-un.