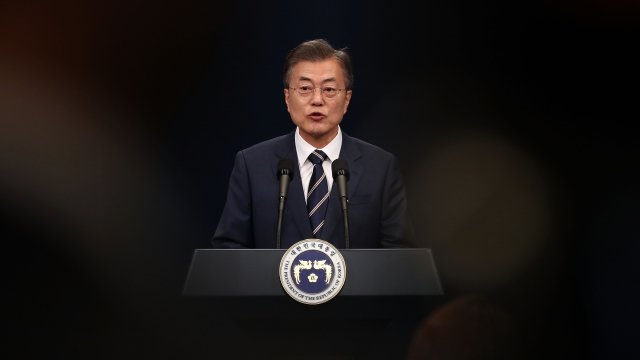 An anonymous South Korean official told the Yonhap news agency whether Moon makes the trip depends on how negotiations go between the North and the U.S. The agency reports the possible three-way summit would likely be to assure Kim that the U.S. could provide his country safety in exchange for denuclearization.

The news comes after a U.S. delegation entered North Korea on Sunday to discuss the substance of any potential meeting between Trump and Kim — in this case, North Korea's nuclear program.

A summit between the two leaders was planned for June 12 in Singapore, but Trump canceled the meeting last Thursday.

Since then, Trump has said a number of times the U.S. and North Korea are still negotiating and that the June 12 summit could happen.

It's unclear if Moon would join that meeting or if there would be a separate summit among the three leaders.