Months After Being Released From Prison, A Pitcher Makes His MLB Debut 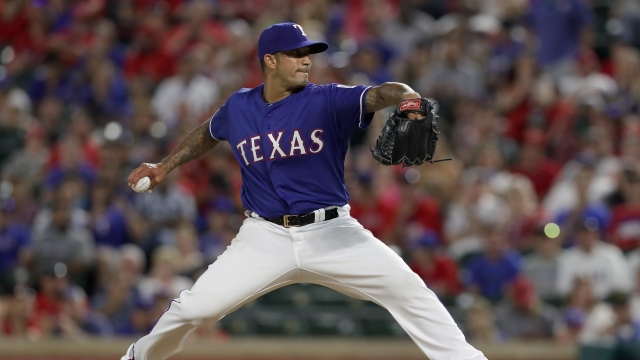 SMS
Months After Being Released From Prison, A Pitcher Makes His MLB Debut
By Carter Woodiel
By Carter Woodiel
May 14, 2016
Matt Bush's alcohol problems almost destroyed his baseball career. But Friday, he finally made his big league debut for the Texas Rangers.
SHOW TRANSCRIPT

Twelve years ago, Matt Bush was the top prospect in baseball. Four years ago, he was sentenced to a yearslong prison term. Now, he's a big leaguer.

"I think the crowd gave me chills out there, when it got really loud and they introduced my name, and I think everything just kind of hit me, where I've come from," Bush said after his MLB debut Friday night.

Bush made his MLB debut Friday night for the Texas Rangers, getting a strikeout and a couple of pop flies in a 5-0 Rangers loss.

The 30-year-old was released from prison in October after serving almost three years for hitting a motorcycle rider with his car while drunk, then fleeing the scene. Bush had been battling alcoholism since he was drafted in 2004.

Bush was drafted first overall by the Padres and spent time with two other organizations since then, falling out of both after drinking troubles. The Rangers signed him a month and a half after he left prison.

Bush's contract is strict, requiring he stay sober and not drive a car. He lives with his father, who takes care of his curfew and brings him to Alcoholics Anonymous meetings.

The Rangers have a history when it comes to handling players with addiction. Josh Hamilton won the 2010 AL MVP award with Texas while recovering from alcohol and cocaine addictions. Hamilton has relapsed since then and is currently on the disabled list.

Bush says he's stayed clean since his 2012 arrest, and his future could be bright if he keeps it that way. Before his call-up to the big leagues, Bush was holding Double-A hitters to a .158 batting average.

This video includes clips from the Fort Worth Star-Telegram, Fox Sports and the Canyonside Baseball and Softball Academy and images from Getty Images.