A Month After Highland Park Shooting, Community Helps Each Other Mourn 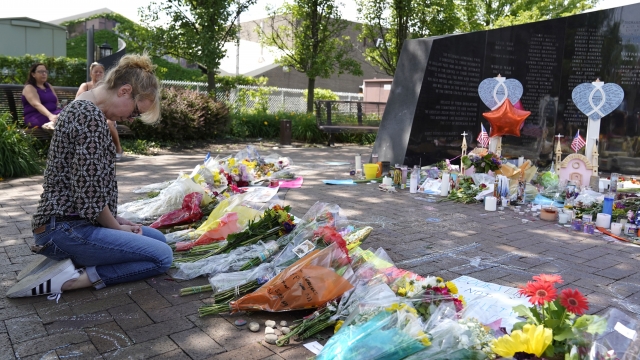 For survivor Howard Prager, being back at the scene of the Highland Park mass shooting in Illinois and playing the tuba once again, this time to honor the seven victims, is part of the grieving process.

A month ago, at the 4th of July parade, Prager and his klezmer band were playing a joyful yiddish tune when the mass shooting started.

The band continued playing for a moment as some were running for their lives.

"I think it was like the orchestra and the Titanic," Prager said. "They know the ship was going down. They saw people maybe running about, but they didn't know what was happening. We didn't either."

To be able to move forward and heal, Prager said he need time.

A month after the 4th of July tragedy in the Chicago suburb of Highland Park, the area is open to the public again, and shops are back in business. On the surface, it seems like life is back to normal.

But for survivors and the community, the grieving process is only beginning.

In a small church in Highwood, just a mile away from downtown Highland Park, mental health services are offered in English and Spanish for free.

“We offer weekly meditation and support groups in this space, and around there we have some private rooms that the church lets us use for individual therapy," said Viridiana Gonzalez, case manager at Highwood Public Library.

Gonzalez and Carmen Patlan work at the Highwood Public Library across the street but have a partnership with the church.

Over 50% of the Highwood population is Hispanic, and many are undocumented and living in poverty.

“We knew personally that a great deal of our families were at the parade," Patlan said.

Patlan is the library’s executive director. She’s long been on a mission to break down the stigma around mental health among Hispanic immigrants.

“I came to this country undocumented," Patlan said. "I understand the feeling.”

Over 30 survivors came to the library for a group session the day after the shooting — many of them children.

“They were still wearing the same clothing they were wearing the day before," Patlan said. "They didn't want to go in their pajamas because they wanted to be ready to run if necessary. The moms were just sobbing and crying and feeling at a loss with what they had witnessed and how they could comfort their children.”

Patlan and her mental health staff have already assisted 550 community members since the tragedy. They say they will continue to do so for as long as it is needed.

“Just yesterday we had a call about this person who is very in the community, and he said that he hasn't really left the house," Gonzalez said. "But just yesterday, he felt like he could call us and ask for help finally. So knowing that even after a month, we are still that a safe place for people to go. That was very meaningful and impactful to me.”

Back in in Highland Park, Rabbi Isaac Serotta has been working tirelessly to offer spiritual comfort to his Makom Solel Lakeside congregation.

About half of the Highland Park population is Jewish, and five of the seven victims were either Jewish or part of Jewish families.

One of them, Katherine Goldstein, was a member of the Makom Solel Lakeside synogogue.

"Katie was one of the nicest, sweetest, most gentle people that you would ever have the pleasure of meeting," Rabbi Serotta said.

Rabbi Serotta says part of his job as a faith leader is to give people permission to mourn.

"Part of it is not using that word healing yet, not that much," Rabbi Serotta said. "I think that it's still very raw for people, and in some sense, people need to be told it's okay to not get over this. That in fact, our tradition teaches us that you don't get over loss anyway, you get through it."

The rabbi says everyone grieves in their own way and in their own time, and for some, the trauma might never fully go away.

But, many people in Highland Park and beyond feel fortunate that the community is united, and people are leaning on each other to find a way forward.