Monkeys Are Better At Math Than We Thought, Study Shows 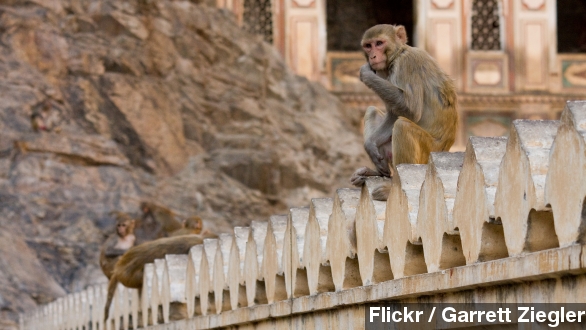 SMS
Monkeys Are Better At Math Than We Thought, Study Shows

Who knew monkeys could do math? Turns out we've known for a while but didn't know know they were so good at it.

A writer for Science World Report notes the study of monkey math goes back at least as far as 2007, when researchers found monkeys were able to add groups of dots together. (Via Flickr / Vijay Anand Ismavel)

Then there was the Duke University study that found monkeys think a lot like humans when it comes to numbers.

Thanks to a recent study from Harvard University, however, we're gaining a little more insight into our furry friends' arithmetic skills. (Via Flickr / Parshotam Lal Tandon)

Researchers taught three rhesus macaques a set of symbols which corresponded to a certain number of drops of reward. The team used a combination of numbers and letters for the symbol set and tasked the monkeys with six different challenges.

And the scientists took things one step further because they wanted to make certain the furry geniuses were actually adding and not just memorizing values. They taught the little fellas a new symbol set, assigning values for each one and tasking them with addition challenges. (Via Flickr / Garrett Ziegler)

Incredibly, LiveScience notes the macaques were "up to 90 percent" accurate with the original symbol set, and though the monkeys were less accurate with the newly learned symbols, they were still able to distinguish larger values from smaller ones.

The outlet reports the researchers will next study whether the monkeys can learn to multiply. The study is published in the journal Proceedings of the National Academy of Sciences.