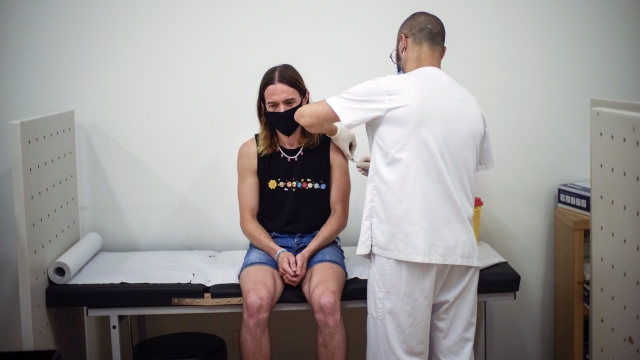 SMS
Monkeypox Has Now Been Declared A National Public Health Emergency
By Axel Turcios
By Axel Turcios
August 4, 2022
The Biden Administration has declared monkeypox a national public health emergency. There are now more than 6,600 cases confirmed in the U.S.

For the past 10 days, Joshua Moran said he's endured lots of pain from monkeypox, but it's slowly going away.

"This guy popped up here. Only one of my face. I have a couple. There's one there. I would say mild pain burning and like very itchy," Moran said.

His symptoms began the same day he was able to get vaccinated for the virus, but only after battling to get an appointment through New York City's Health Department website.

"I had a bump in my groin, but I thought it was an irritation," he said.

He says he went to see his primary care doctor for a check up.

By the time he got the results back, a week later, his condition had worsened.

"The lesions just started popping up over all of my body. I was like, okay, I'm pretty sure it's monkeypox," he said.

The results only confirmed what he already knew, he was positive for monkeypox, something that worried him because he's also a type one diabetic.

"I wanted to get the antivirals. And I also wanted to know, the infection down there. Like it didn't look good — as a diabetic, skin infections… they can get bad," he continued.

According to the latest CDC numbers, there are more than 6,600 confirmed monkeypox cases in the U.S.

New York City remains the epicenter of the outbreak… the five boroughs have reported more than 1,600 cases…

Andrea Kim is an epidemiologist for the CDC.

"There's definitely a shortage of supply. You know, we are in a race. The manufacturer has been given marching orders to have more millions of doses available," Kim said.

"You have to take three pills a day. Not only has it been hard for people to get the vaccine, but difficult to also get the antivirals. It's not a good mix," Moran said.