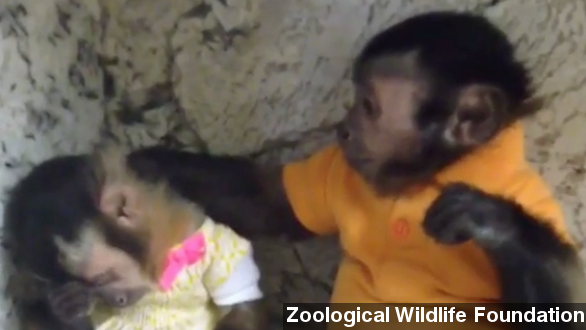 SMS
Monkey Love: Capuchin Consoling Its Pal Is Practically Human
By Lauren Zima
By Lauren Zima
January 21, 2015
Angelica the monkey was in a timeout, but her friend Toby was there to console her.
SHOW TRANSCRIPT

You're about to see some adorable monkeys, but they practically look like people. Watch their behavior.

So Angelica, in the skirt, was in a timeout at her home in the Zoological Wildlife Foundation in Miami. Her buddy Toby seemed to be consoling her. Her caregivers gave their Instagram vid the hashtag "almosthuman."

According to HLN, Angelica was in timeout because she got a little aggressive when playing with a puppy.

Now, capuchins are known to be very smart and social monkeys. According to the Discovery Channel, they're...

Animal Planet notes of some Capuchins, "These are some of the only tool-using wild monkeys in the world."

So the adorable interaction makes sense. But seeing that level of care is still pretty amazing.

The Zoological Wildlife Foundation is "dedicated to educating the public about rare and endangered animal species in captivity and in the wild." You can donate to and visit the organization.