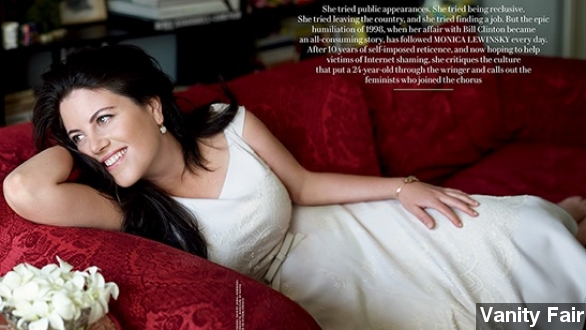 File this under celebrity feuds no one saw coming: Monica Lewinsky is calling out Beyoncé.

Why? Well, in Bey's song "Partition," she coos: "He popped all my buttons and he ripped my blouse. He Monica Lewinsky'd all on my gown." And Lewinsky says that lyric doesn't make any sense. (Via Columbia Records / Beyoncé)

In a new essay for Vanity Fair — Lewinsky's first time opening up about her affair with Bill Clinton and its aftermath in more than a decade — she calls for a correction.

"Thanks, Beyoncé, but if we're verbing, I think you meant 'Bill Clinton'd all on my gown,' not 'Monica Lewinsky'd.'"

Hey, it's true. The correction seems innocent enough — "Partition" is the most recent Lewinksy reference in music. But it's definitely not the only one.

And Raekwon referenced Lewinsky and oral sex back in 1999 on "100 Rounds." (Via Loud Records / Raekwon)

Of course, that's just a handful of Lewinsky references that have popped up in pop culture since 1998.

And USA Today suggests calling out Beyoncé but not anyone else seems like a bit of a double standard.

But maybe it's not worth it to call out everyone. Or even possible. Slate says no matter what Lewinsky does to rehab her image, the public will never let her live down her past — because of another double standard.

"Lewinsky is 40 years old, but she's been allowed just one career track—disgraced former mistress—and now we're dinging her for attempting to make a living from it. ... As Bill Clinton rakes in cash off of book deals and speaking engagements like any other former president, Lewinsky is left to feed on scraps from the scandal."