Modi's Election Win In India Was Fueled By Hindu Nationalism 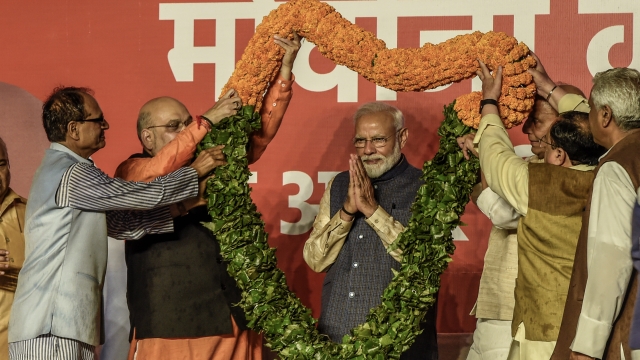 India's Prime Minister Narendra Modi won a landslide re-election victory thanks in large part to his appeals to Hindu nationalism.

Indian Prime Minister Narendra Modi's reliance on religious nationalism helped him cruise to reelection. Now the the country's minority religions worry his victory could escalate violence against them, and it could also exacerbate tensions with rival Pakistan.

Modi leaned heavily on his Hindu faith during the electoral campaign, promising to further empower the country's massive Hindu population. That's a winning electoral strategy in a country that's about 80 percent Hindu: Modi's BJP Party won a commanding victory that expanded its majority in the country's parliament.

But resurgent Hindu nationalism has had violent consequences for the country's minority Muslim population. Bands of "cow protector" vigilantes have attacked, lynched, and fatally beaten Muslims over accusations of selling or eating beef.

Modi has condemned the vigilante attacks, but a report from Human Rights Watch says Indian authorities often turn a blind eye to these assaults.

Modi's nationalist message could also spell trouble for the country's turbulent relationship with neighboring Pakistan. In the run-up to the election, Modi responded to a terrorist attack against Indian forces in the contested territory of Kashmir by launching airstrikes into Pakistan. That move won him a lot of domestic support, but dangerously escalated tensions between the two countries.

Pakistan has said it wants to conduct peace talks with Modi's government — but in a potential warning to India, the country also test-launched a nuclear-capable ballistic missile in the last days of the election.