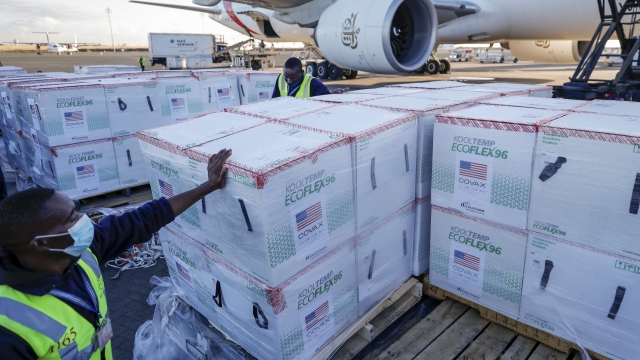 SMS
Moderna To Supply Africa With Up To 110 Million COVID Vaccine Doses
By Newsy Staff
By Newsy Staff
October 26, 2021
If the full contract with Moderna is activated, African nations can reach the goal of vaccinating 450 million people by September 2022.

Moderna on Tuesday said it will make up to 110 million doses of its COVID-19 vaccine available to African countries, which local officials called a breakthrough on the world's least-vaccinated continent.

The announcement said Moderna is prepared to deliver the first 15 million doses by the end of this year, with 35 million in the first quarter of 2022 and up to 60 million in the second quarter. It says "all doses are offered at Moderna's lowest-tiered price."

"It is a great day for us," the African Union special envoy on COVID-19, Strive Masiyiwa, told reporters, after African nations faced months of frustration over rich countries' vaccine hoarding and delayed deliveries of doses.

He thanked the United States for essentially allowing African nations to go to the head of the line to buy the Moderna doses. A White House official said the U.S. will defer delivery of about 33 million Moderna doses between December and February that were originally intended for the U.S. so that the AU can buy them instead.

Masiyiwa stressed that African countries are first purchasing 50 million Moderna vaccines with the option for 20 million a month in April, May and June, depending on the company's performance in December. "We are in position to secure more vaccines from Moderna but want to see more concrete details emerging about their production in Africa," he said.

Moderna called this "the first step in our long-term partnership with the African Union," which has been outspoken about the need for many more COVID-19 vaccine doses.

Africa and its 1.3 billion people remain the least-vaccinated region of the world against COVID-19, with just over 5% fully vaccinated.

Moderna said this agreement is separate from its deal with the global COVAX project to supply up to 500 million doses from late this year through 2022. COVAX aims to supply doses to low- and middle-income countries.

And yet with all these vaccines, the African continent will not hit the mark of fully vaccinating 10% of its population by the end of this year, said Vera Songwe, executive secretary of the U.N. Economic Commission for Africa.

Less than 9% of the population in Africa has received at least one dose of a COVID-19 vaccine, said Seth Berkley of GAVI, the Vaccine Alliance, calling it "unacceptable."