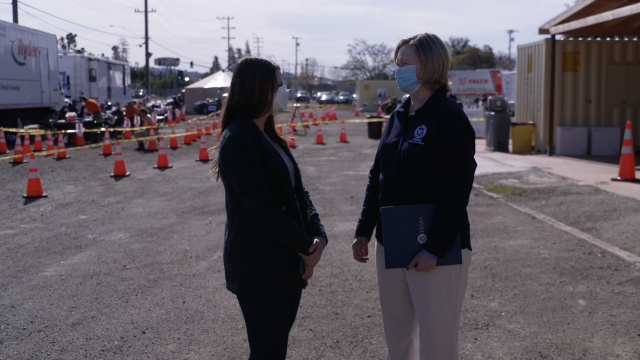 As more and more vaccine doses become available, the challenge is still how to get those doses to the people and communities that need them the most. And that's where mobile vaccination sites like this one come into play.

There’s a new problem in the quest for vaccinations. In some states, there’s more supply than there are people to actually administer the shots. That includes here, in California. Mobile vaccine clinics, run by FEMA, are helping. These are different from the large mass vaccination sites and there have been more than 500 of them across the country. The clinics stay in one spot for a week...then pack up and move. Three weeks later, it’s back to the original site for dose two.

"We have two community vaccination centers, one here in Oakland at the Coliseum and one in L.A. Each of those centers has three mobile centers attached to them," said FEMA Assistant External Affairs Officer Deanna Frazier.

FEMA’s Deanna Frazier says this is a coordinated effort by the Biden administration. Logistically, it’s a nightmare. It takes 59 people from 53 different agencies just to run this one site in Oakland.

"Cal Fire, 15 from FEMA, nine from the AMR. They provide our vaccinations for us, AmeriCorps, California Highway Patrol," she said.

So this week, the plan is to vaccinate more than a thousand individuals just at this site alone, but day to day, it really depends. For example, on March 23, they vaccinated more than three hundred people. But on March 26, there are more than 512 appointments.

Getting people to their appointments...La Familia... a community nonprofit operating for  more than 40 years in the San Francisco Bay Area. It's a trusted messenger.

CEO Aaron Ortiz says his staff has worked around the clock to get people here.

"If they can get here via car, they do. We've had people walk just from around the corner and the local blocks here just walking up to get the vaccine, a vaccination from the phone calls that we've made," he said.

"If someone wants to get here, but they need a ride? Are you giving rides?" Newsy asked. "We can provide gas, or we can also provide transportation."

It’s unclear how long the mobile sites will operate across California. Frazier says discussions are now underway. La Familia isn’t waiting though. For the past two weeks, Ortiz says they’ve also secured doses directly from the state and even a private third party vendor.

"I want to be able to do two thousand between this site and our other site. What we need is just more vaccine," he said.