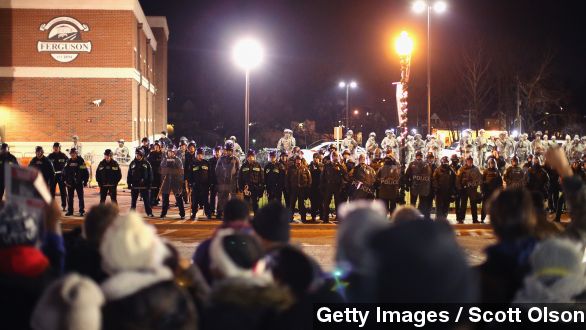 Nixon announced a special session of the Missouri General Assembly Friday night to discuss the problem: heavy deployment of National Guard and Highway Patrol personnel means “financial obligations are on track to exceed the current appropriation authority for emergency duties.”

Missouri’s last approved budget earmarks $4 million for National Guard activities and $3.4 million for the emergency department that oversees the Missouri Highway Patrol. The money was supposed to fund each through June 30, 2015.

Nixon’s office warned going over budget could make it harder for Missouri to adequately fund other emergency response services — but KSDK points out he is still using what budget he can.

“Meanwhile, the Governor extended a program that offers loans to affected businesses. More than $600,000 in funding remains through the small business relief program.”

More funding would help Nixon fulfill earlier promises: on Tuesday he committed to tripling the National Guard presence in Ferguson, where Mayor James Knowles said they were spread too thin and responding too slowly. (Video via MSNBC)

The financial wrangling comes as protests ramp back up following the Thanksgiving holiday. Demonstrators targeted St. Louis area malls on Friday, calling for a commercial boycott during the busiest shopping day of the year. NBC reports police arrested at least 16 protesters overnight.

Nixon says he expects to work with lawmakers over the next few days to free up resources needed to keep funding going.