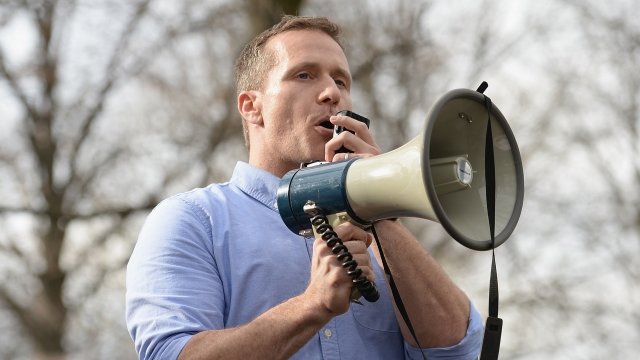 A report from a special committee of Missouri lawmakers released Wednesday says a woman testified Gov. Eric Greitens "coerced" her into having non-consensual oral sex. It also quotes her as saying he took a nude photo of her and told her never to mention his name, or he would put the photo everywhere he could.

The Republican governor was indicted for felony invasion of privacy in February in connection to the latter allegation. That came after the ex-husband of a woman the governor admitted to having an affair with made the claim to a St. Louis news outlet.

Shortly after that indictment, the Republican-controlled legislature started its own investigation.

Just minutes before the report was released, Greitens called reporters to a news conference, where he took a hit at the pending report and the lawmakers who put it together. He also pointed to his upcoming criminal trial as his saving grace. He even likened the investigation to a familiar national narrative.

"We expect that tonight's report will be full of more false, outlandish and salacious accusations," Greitens said.

"This is exactly like what's happening with the witch hunts in Washington, D.C," he continued. "Smearing, lying and attacking people who want to change how things are done is wrong in Washington and it's wrong in Missouri."

Toward the end of his remarks, Greitens said, "In 33 days this will all come to an end because in the United States of America, you get your day in court."

The woman also told lawmakers Greitens slapped her when she told him she had slept with her husband.

The report included testimony from the woman who Greitens admitted to having an affair with, as well as three other witnesses who largely corroborated what she said. Democratic lawmakers who read the report ahead of its release started calling for the governor's resignation.

Greitens has repeatedly denied any non-consensual encounters, violence or blackmail. He vowed Wednesday to stay in his position. The committee was expected to decide whether the governor should be impeached, though their report Wednesday did not include a recommendation.