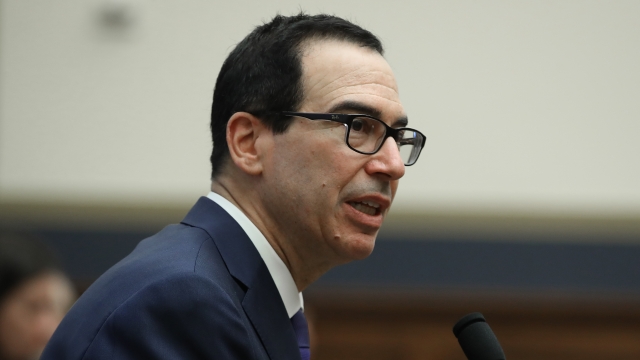 SMS
Mnuchin Warns That Trump Could Still Impose Mexico Tariffs
By Alec Larson
By Alec Larson
June 9, 2019
In an interview with Reuters, the Treasury Secretary said President Trump has the authority to levy tariffs if the Mexico deal fails.
SHOW TRANSCRIPT

On Friday, a deal between the two countries was made that will avert the tariffs from going into effect. Mexico agreed to deploy National Guard troops to help with immigration enforcement as well as agreeing to take back asylum seekers who had crossed the southern border.

Mnuchin said the Trump administration feels the terms of the deal meet its goals of combating the flow of Central American migrants to the U.S.' southern border.

Last week, President Trump threatened to levy a series of escalating taxes on Mexico if the country did not take major steps to combat illegal immigration at the U.S.-Mexico Border.