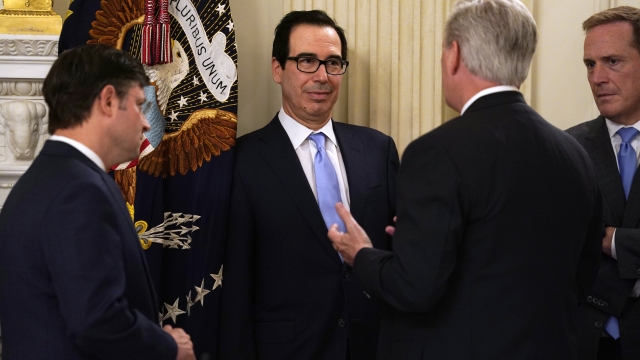 SMS
Mnuchin: Unemployment Rate Will Likely Get Worse Before It Improves
By LeeAnne Lowry
By LeeAnne Lowry
May 10, 2020
The Treasury Secretary says the actual rate now might be closer to 25%.
SHOW TRANSCRIPT

The Labor Department reported Friday that the country lost 20.5 million jobs in April, surging unemployment to 14.7%. That's up from 4.4% the month before and the highest unemployment since World War II. The hardest-hit sector was leisure and hospitality, with food service workers being hurt the most.

And Mnuchin said Sunday the actual rate now might be closer to 25%, due to losses that haven't been counted yet and unemployed people who are not seeking work. If it is as high as he estimates, joblessness would be as bad as the Great Depression at its peak.

Mnuchin told Fox News that businesses need to reopen to prevent permanent economic damage. He indicated the White House is considering options to help businesses — including a payroll tax cut — but that it won't reward "poorly managed" states.

Correction: A previous version of this story included incorrect information about March's unemployment rate. This story has been updated.