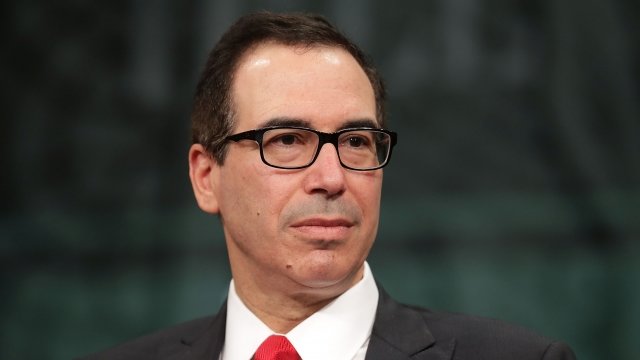 SMS
Treasury Secretary Contacts Top US Banks About Economic Concerns
By Audrey Esther
By Audrey Esther
December 24, 2018
The treasury secretary contacted the nation's largest banks to try and calm fears about the current state of the U.S. economy.
SHOW TRANSCRIPT

While U.S. stocks are on track to have their worst December since the Great Depression, the efforts of the treasury secretary to ease concerns about the economy may have backfired.

On Sunday, Steven Mnuchin said he spoke with the chief executives of the nation's largest banks — including Bank of America, Citi and Wells Fargo — to reassure investors that "the markets continue to function properly."

Despite this, the Dow fell below 22,000 at the opening bell on Monday.

Mnuchin said he spoke with top executives by phone about whether their banks had noticed any liquidity issues and if there were any issues they thought might affect the markets.

The treasury secretary plans to have a conference call on Monday with the President's Working Group on Financial Markets. That group includes officials with the Securities and Exchange Commission and the Federal Reserve's Board of Governors as well as the Comptroller of the Currency.

Also on Monday, President Trump said on Twitter: "The only problem our economy has is the Fed. They don't have a feel for the Market, they don’t understand necessary Trade Wars or Strong Dollars or even Democrat Shutdowns over Borders."

Trump reportedly wants to fire Federal Reserve Chairman Jerome Powell, something Mnuchin has said isn't true. On Twitter, Mnuchin said Trump disagrees with the Fed's current policies, but that the president hasn't suggested firing Powell nor does he think he has the "right to do so."