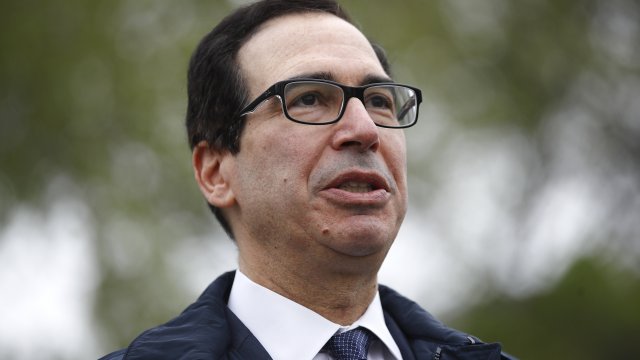 SMS
Mnuchin Predicts U.S. Economy Will Bounce Back Fast After Coronavirus
By Briana Koeneman
By Briana Koeneman
March 30, 2020
He said, by the third quarter of this year, Americans will see "very large GDP numbers and low unemployment back to where we were beforehand."
SHOW TRANSCRIPT

Treasury Secretary Steven Mnuchin says he believes the U.S. economy will bounce back from the hit it's taken from the coronavirus pandemic in a just a few months.

Mnuchin made the prediction during an interview with Fox News. He said, by the third quarter of this year, Americans will see QUOTE "very large GDP numbers and low unemployment back to where we were beforehand."

Mnuchin added he wasn't sure what the numbers will look like for this quarter. But he expressed confidence that the U.S. will QUOTE "kill the virus" and get the economy up and running again.

He also encouraged small businesses to use the funding provided in the $2 trillion coronavirus relief package signed into law last week to rehire employees.

The coronavirus outbreak has taken quite a toll on the U.S. economy as officials forced many nonessential businesses to close and ordered people to stay home as much as possible. More than 3 million Americans filed for unemployment during the third week of March.