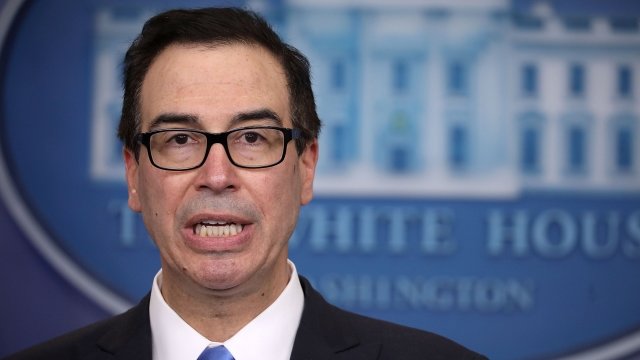 SMS
Mnuchin Racked Up Nearly $1M Bill On Taxpayer-Funded Military Flights
By Lindsey Pulse
By Lindsey Pulse
March 16, 2018
A watchdog group says Treasury Secretary Steven Mnuchin appears not to have traveled on commercial aircraft while in office — and that can get pricey.
SHOW TRANSCRIPT

Watchdog group Citizens for Responsibility and Ethics in Washington obtained documents through a Freedom of Information Act request.

CREW says Mnuchin racked up that bill in the spring and fall of 2017 on eight trips — both domestic and overseas —  on military aircraft.

In a statement, the Treasury Department said CREW's report "consists of falsehoods and mischaracterizations."

The department points out CREW's admission that Mnuchin's travel requests are similar to those submitted by Obama-era secretaries. CREW notes Mnuchin has apparently never used a commercial aircraft while in office and that the Obama secretaries did.