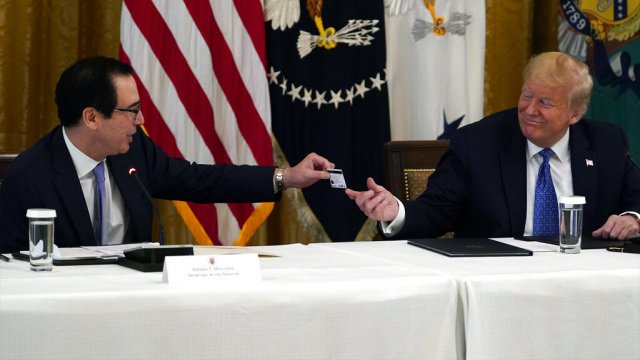 The nation's top financial leaders say the economy isn't going to turn around just yet. Treasury Secretary Steve Mnuchin told lawmakers things will turn around during the third and fourth quarters of this year and into 2021. The third quarter begins in just over a month.

It was the first meeting with Mnuchin, Federal Reserve Chairman Jerome Powell and the Senate Banking Committee to discuss implementation of the CARES Act. The legislation mandates a quarterly report to Congress on the nearly $2.2 trillion given to help individual Americans and small businesses.

Mnuchin told Sen. Elizabeth Warren companies receiving funds promised to make their "best effort" to support jobs, but stopped short of saying companies that receive taxpayer funds would be required to keep workers on the payroll.

A new Congressional Oversight Commission report found only $37.5 billion of the $500 billion for state and local governments as well as business lending has been used. More than 36 million people have filed for unemployment since the economy began to shut down mid-March. Mnuchin touted the administration's work thus far, focusing on other funds distributed.

GOP leadership hasn't decided whether to take up the most recently passed stimulus funding from the House, as many in the party say they want to see how the other funds are distributed.

Powell told lawmakers their work is likely not done.