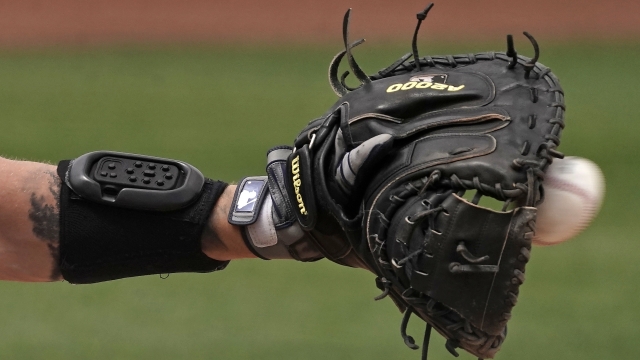 SMS
MLB To Allow Technology To Combat Sign Stealing During Regular Season
By Meg Hilling
By Meg Hilling
April 13, 2022
A catcher wears a wristband device with buttons, including nine pitch options. A verbal message is transmitted to the pitcher who has a hat receiver.

As a new season of major league baseball gets underway, new technology is reshaping the traditional way of how pitches are delivered to home plate.

Craig Filicetti and John Hankins are the creators of the PitchCom Communication System, which is an electronic device that allows catchers to communicate to pitchers without having to use traditional hand signals. Signals, that teams have historically tried to steal from one another in order to warn their batters what pitch was coming, such as the Houston Astros did during the 2017 World Series.

"After the sign stealing scandal broke in November 2019, I wanted to do something that would eliminate sign stealing, improve the pace of play, but yet, be acceptable to the players and also the fans," Hankins said.

So how does this work? The system includes a wristband device worn by the catcher with a handful of buttons, including nine pitch options. Think "slider high outside" or "knuckleball low middle." Instead of hand signaling the pitcher what to throw, the catcher pushes one of the buttons. A verbal message is transmitted to the pitcher wearing a lightweight receiver in his hat. The catcher and up to three other players can also be wearing receivers and hear the message described by some as a whisper.

And each receiver can be set to a different language.

"It can do any language you want," Filicetti continued. "You can have it in Japanese, you can have Korean. And then any number of players on the field could have this on and whatever the pitch is, they will all hear simultaneously in their own language."

After testing in lower leagues last season, major league baseball gave teams the green light to use the device for this season.

"Each team currently has 10 receivers and three transmitters and a charging box, which is actually a very special charging box we provided," Hankins said.

While the device is not mandatory, many players and coaches have taken to it quickly.

"It's pretty surreal when I turn the TV on and I see the piece that was probably built — it was definitely built — in my shop, you know? And I see it there on the field and they're using it and then, hear them talking about it afterwards. It's a very good feeling," Filicetti said.

And it's not just pro teams that are taking interest in the device.

"We know that there's a lot of other baseball organizations that are having trouble with sign stealing," Hankins said. "Colleges, high schools, travel ball. Believe it or not, we've got been contacted by teams even 10 and under! We are currently exploring designing a low-cost alternative for them."

So, as your favorite teams step up to bat this season, glance down at the catcher's wrist for a look at this device in action.