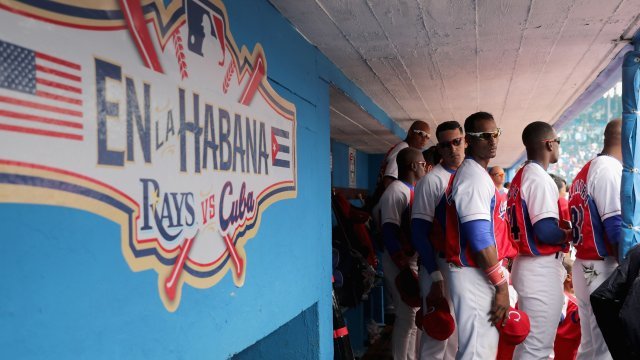 For the longest time, most baseball players in Cuba could only dream about leaving their country to have a chance to play in the major leagues.

But it looks like that’s all about to change.

Major League Baseball has come to an agreement with the Cuban Baseball Federation to let Cuban players freely come to the U.S.

It’s similar to the deal MLB has with Japanese professional baseball teams. Japanese players who want to come to the States have to be “posted” by their teams. Major league clubs have to pay that posting fee just to have the opportunity to negotiate a deal with the player.

So, why is this such a big deal?For years, Cuban players were not allowed to just come to the States to play ball. They essentially had to defect from their teams and their country — usually in secret.

Some, like pitcher Aroldis Chapman, were able to just up and leave; Chapman simply walked out of a hotel while his team was in the Netherlands for a tournament. Others, like outfielder Yasiel Puig, endured multiple failed attempts at leaving. Puig was even held hostage for a short amount of time by smugglers until he could pay them off. That’s part of the reasoning behind the new guidelines.

MLB said it was concerned that players could be hurt or killed just for wanting to play baseball.Most people in the game think this is a great deal for both sides.

A former agent said, “Cuba would get a financial windfall, while MLB would get an end to the smuggling-related headlines.”

Former pitcher Livan Hernandez, who defected from Cuba in 1995 and pitched in the bigs for more than a decade, agreed. He said: “Players will be happy to play in the best league in the world and show their skills. There’s a lot of talent in that country.”

But this agreement isn’t just about baseball. It’s also about international relations. The U.S. and Cuba have not had official diplomatic relations since the 1960s. President Obama started to try and re-establish relations with the country during his eight years in office, but President Trump has since reversed course on that.

Despite the strained relations, baseball has always been a common ground for the two countries. Former Cuban leader Fidel Castro was a huge baseball fan, and there was even an exhibition game between the Tampa Bay Rays and the Cuban national team in 2016. The agreement will run through the 2021 MLB season.