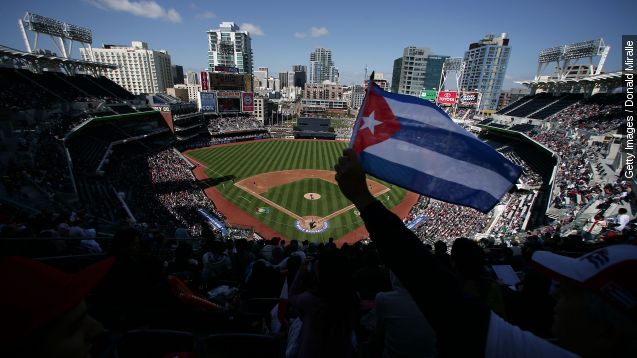 By Matt Moreno
December 15, 2015
MLB is beginning a tour of Cuba on Tuesday, the league's first official trip there since 1999.
SHOW TRANSCRIPT

MLB has a long, rich history with Latin America. Latino players made up about 29 percent of the league last year.

That's why MLB keeping and improving ties with Cuba is so important. (Video via The White House)

MLB is touring Cuba all this week, starting Tuesday. Eight MLB players are embarking on the goodwill tour, including four players who defected from Cuba — the Dodgers' Yasiel Puig, the White Sox's Jose Abreu, the Cardinals' Brayan Pena and free agent Alexei Ramirez.

The players and MLB execs will participate in charity events and youth camps during the visit. It's MLB's first activity there since the Baltimore Orioles played the Cuban national team in Havana in 1999.

For Pena, it's his first trip home in nearly 15 years. For others, though, including Abreu, who defected from Cuba in 2013, the homecoming is far earlier than expected.

The New York Times reports Cuba normally doesn't let defected players re-enter the country for at least eight years to discourage others from doing the same. The outlet writes, "It is rare, if not unprecedented, for a Cuban player active in the major leagues to make a high-profile return to the island."

Many Cuban players defect in hopes of a better life in the U.S.

Defecting from Cuba isn't completely uncommon, but that doesn't make it any less dangerous.

For Puig, the treacherous journey took weeks. Puig defected in 2012, reportedly with the help of drug smugglers who kept him and three others in a small motel room for weeks as they negotiated his journey.

All of the defected players returning to the island have reportedly been cleared to do so by the Cuban government, but it's not a exactly "bygones be bygones" type of homecoming. Players won't be able to return to their homes and will instead only be able to reunite with family members at hotels. (Video via Bloomberg)

MLB's trip will last until Friday.