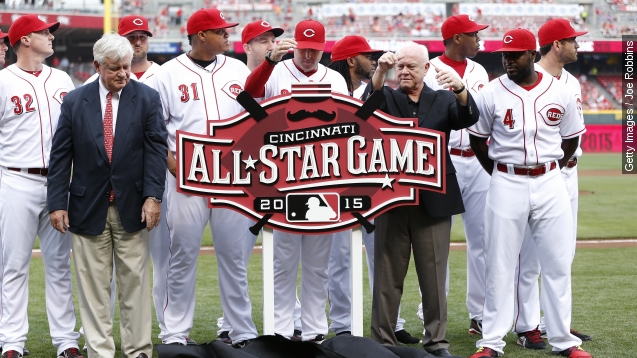 On Tuesday, the National League and American League teams will face off against each other in the MLB All-Star game, and the game matters in a big way. (Video via WCPO)

Ever since 2003, the All-Star game has determined home field advantage for the World Series as an incentive for players to actually try. (Video via MLB)

But the game still seems stuck between "it matters" and "it's just an exhibition game." MLB is probably at fault for that.

At 34 players, the rosters are deep. It's a nine-player increase from the regular MLB active rosters that teams use throughout the season. That means managers can (and almost always do) make wholesale changes to their lineups throughout the game to keep fans happy.

The changes are especially apparent with pitching as it's not too uncommon to see nine different pitchers per team in a nine inning All-Star game.

There's also MLB's rule of at least one player from every team must be on the All-Star roster. Let's admit it: There's some bad teams out there that maybe don't deserve an All-Star representative.

The massive roster overhauls and constant efforts to keep fans happy give the All-Star game a rather odd feel; it's like an arcade game with real implications.

One change MLB's made for the game that doesn't seem to be getting any bad reviews is the installment of the designated hitter no matter the ballpark. As much as we all love watching Bartolo Colon swing a bat, he's not the one you want to see at the dish with the game on the line.

While roaring fans might not affect a game as they would in football or basketball, home field advantage in the World Series is certainly a big deal. The home team's won the World Series seven of the last 10 times.

So who do you think will win this year's All-Star game? Let us know on Twitter @NewsyVideos.