MLB Expansion: Possibly Coming To A City Near You 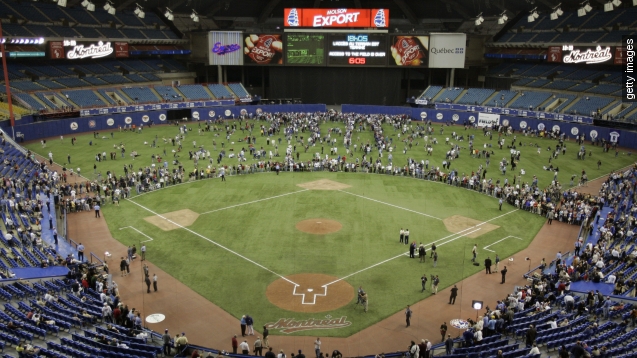 SMS
MLB Expansion: Possibly Coming To A City Near You
By Tom Kackley
By Tom Kackley
July 17, 2015
The MLB commissioner says the league could expand. We take a look at some potential cities for the next MLB franchise.
SHOW TRANSCRIPT

So where could the MLB look to add a franchise or even two?

ESPN has a shortlist from the MLB of some possible cities. One of those is Montreal, home to the Expos from 1969 until 2004 before becoming the Washington Nationals.

But the MLB could also look south of the border if it wanted to expand internationally.

Mexico City would be an obvious candidate for expansion with a population of more than 21 million people and the media market to support it.

But the last exhibition game in the city didn't draw too many fans. An average of 13,169 people showed up to watch the Astros and Marlins play exhibition games in 2004. That figure is dwarfed by an average attendance of 48,233 fans in Montreal for two exhibition games earlier this year.

Manfred also says he wants to play exhibition games in Cuba as soon as next spring.

Cuban baseball players have long been some of the sport's best, and the game is ingrained into the culture on the island.

But while tensions have thawed between the U.S. and Cuba, the possibility of Havana having a team doesn't seem terribly realistic for now considering the size of the local economy.

There are about six other possibilities in the United States listed for expansion including Las Vegas and San Antonio. The MLB considered most of those options when the Expos looked to relocate in 2004.