MLB Draft Highlights The Importance Of A Franchise Shortstop 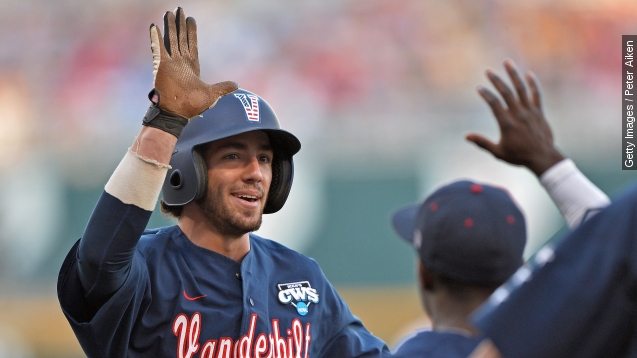 Shortstops went a historic three-for-three in Major League Baseball's draft Monday night — a great average any given day at the ballpark.

The Arizona Diamondbacks drafted shortstop Dansby Swanson with the first overall pick in the draft. The Houston Astros and Colorado Rockies followed suit with shortstop picks of their own, meaning the first three players drafted all came from that same position.

It's a bit surprising for a position that traditionally doesn't produce a ton of offensive power, but teams tend to be leaning more and more toward the six position to help build their franchises.

In the past 12 years alone, including 2015, a team's drafted a shortstop first overall five times. Before that, only seven shortstops were drafted first in the 39 years since the draft started in 1965.

A similar trend happened in the '80s and early '90s when, again, five were drafted first in a 12-year span. Four of those five went on to be All-Stars — again, a great baseball average.

"Big night for Astros and the Astros' fan base."

"They've been waiting for this day. Astros No. 1 prospect Carlos Correa's going to make his major league debut in Chicago tonight. We've been waiting a couple years for this," KPRC reports.

But for a league so hell-bent on offense and who can hit the the ball over the wall the farthest, the comeback of the shortstop is a curious quirk. That is until you consider the factors that don't always end up on the highlight shows.

While teams' defensive liabilities will usually be cast to corner outfield positions or first base, shortstop is a place for the quickest, most agile players. Basically, your team's best overall athlete. (Video via Easton)

"Your job at shortstop is to be a vacuum and have a ton of range," baseball coach Ricky Scruggs​ explains on eHow.

As a writer for the Pittsburgh Post-Gazette describes: "The position requires a unique blend of size, speed, arm strength, good hands and quick feet. Shortstops also must process information quickly enough to make use of those physical tools. They relay signs, serve as an alternate pitching coach and never, not once, can they take a play off."

Remind you of anyone?

"Derek Jeter! Derek Jeter!" the crowd chanted in a promotional video for the Jordan brand. (Video via Jordan)

The now-retired shortstop Derek Jeter led the Yankees to 16 playoff appearances in his 19-year major league career, five of which New York went on to win the World Series.

Which, if you ask any Vanderbilt or Arizona Diamondback fan, sounds like the guy just selected first overall.

"They selected Vanderbilt shortstop Dansby Swanson. Swanson helped lead Vanderbilt to the 2014 national title, as the College World Series Most Outstanding Player. He's currently on this year's team, which is competing for another title," KVOA reports.

This video includes images from Getty Images and Johnny Walker Photography and music from Bensound / CC BY ND 3.0.