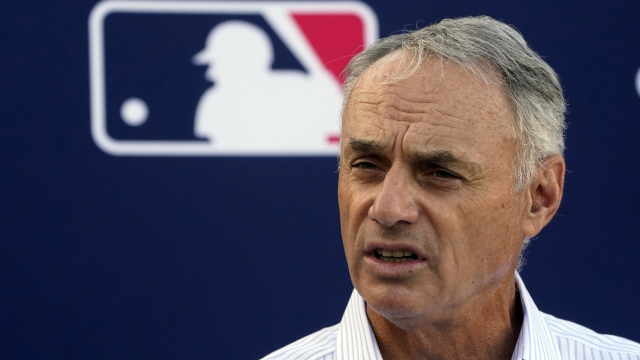 SMS
MLB Cancels Opening Day After Sides Fail To End Lockout
By Associated Press
By Associated Press
March 1, 2022
Players rejected an offer on the ninth straight day of negotiations, setting the stage for MLB to follow through on its threat to cancel opening day.

Major League Baseball has canceled opening day, with Commissioner Rob Manfred announcing Tuesday the sport will lose regular-season games over a labor dispute for the first time in 27 years after acrimonious lockout talks collapsed in the hours before management's deadline.

Manfred said he is canceling the first two series of the season that was set to begin March 31, dropping the schedule from 162 games to likely 156 games at most. Manfred said the league and union have not made plans for future negotiations. Players won't be paid for missed games.

"My deepest hope is we get an agreement quickly," Manfred said. "I'm really disappointed we didn't make an agreement."

After the sides made progress during 13 negotiating sessions over 16 1/2 hours Monday, the league sent the players' association a "best and final offer" Tuesday on the ninth straight day of negotiations.

Players rejected that offer, setting the stage for MLB to follow through on its threat to cancel opening day.

At 5:10 p.m., Manfred issued a statement that many fans had been dreading: Nothing to look forward to on opening day, normally a spring standard of renewal for fans throughout the nation and some in Canada, too.

The ninth work stoppage in baseball history will be the fourth that causes regular season games to be canceled, leaving Fenway Park and Dodger Stadium as quiet in next month as Joker Marchant Stadium and Camelback Park have been during the third straight disrupted spring training.

"The concerns of our fans are at the very top of our consideration list," Manfred said.

The lockout, in its 90th day, will plunge a sport staggered by the coronavirus pandemic and afflicted by numerous on-field issues into a self-inflicted hiatus over the inability of players and owners to divide a $10 billion industry. By losing regular-season games, scrutiny will fall even more intensely on Manfred, the commissioner since January 2015, and Tony Clark, the former All-Star first baseman who became union leader when Michael Weiner died in November 2013.

Past stoppages were based on issues such as a salary cap, free-agent compensation and pensions. This one is pretty much solely over money.

This fight was years in the making, with players angered that payrolls decreased by 4% from 2015 through last year, many teams jettisoned a portion of high-priced veteran journeymen in favor of lower-priced youth, and some clubs gave up on competing in the short term to better position themselves for future years.

The sport will be upended by its second shortened season in three years. The 2020 schedule was cut from 162 games to 60 because of the pandemic, a decision players filed a grievance over and still are litigating. The disruption will create another issue if 15 days of the season are wiped out: stars such as Shohei Ohtani, Pete Alonso, Jake Cronenworth and Jonathan India would be delayed an extra year from free agency.

Players would lose $20.5 million in salary for each day of the season that is canceled, according to a study by The Associated Press, and the 30 teams would lose large sums that are harder to pin down. Members of the union's executive subcommittee stand to lose the most, with Max Scherzer forfeited $232,975 for each regular-season day lost, and Gerrit Cole $193,548.