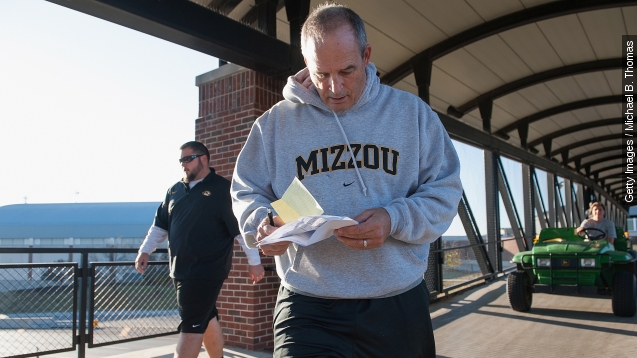 SMS
Mizzou's Gary Pinkel Stepping Down After Lymphoma Diagnosis
By Cliff Judy
By Cliff Judy
November 13, 2015
University of Missouri head football coach Gary Pinkel will step down after the 2015 season. The surprise announcement came after a cancer diagnosis.
SHOW TRANSCRIPT

Gary Pinkel is stepping down as the head football coach at the University of Missouri at the end of the 2015 season for health reasons.

Pinkel — Mizzou's winningest head coach in school history — made the surprise announcement Friday afternoon saying he was diagnosed with lymphoma in May. (Video via Mizzou Network)

In a statement from the university's athletics department, Pinkel says he received cancer treatment over the summer.

Pinkel said, "I made the decision in May, after visiting with my family, that I wanted to keep coaching as long as I felt good and had the energy I needed."

Pinkel made national headlines this past week for supporting his players' decisions to boycott football activities.

"They were discussing with me what they planned on doing this weekend," Pinkel told reporters on Monday.

The players had joined in the protest of University of Missouri leadership following several race-related incidents and what protesters considered ineffective leadership.

But at least initially, Pinkel's decision appears to be unrelated to the tensions on campus.

Pinkel turned the Missouri Tigers from a perennial afterthought on the national scale into a respectable — and at times championship contending — team. In 15 seasons, he won a school record 117 games. (Video via YouTube / Gary Pinkel)

This video includes images from Getty Images. Newsy is affiliated with the University of Missouri.