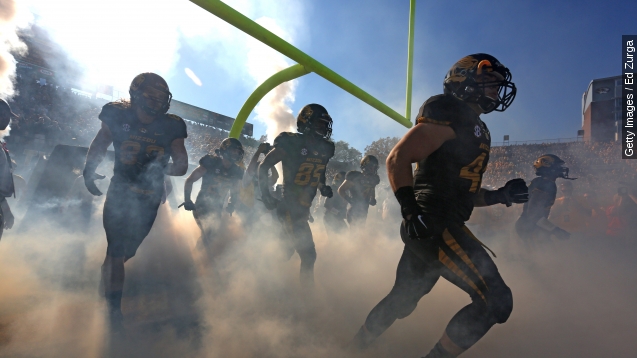 SMS
Mizzou Football Players Boycott For President's Resignation
By Ryan Biek
By Ryan Biek
November 8, 2015
Students are protesting in support of the #ConcernedStudent1950 movement, which calls for the resignation of University President Tim Wolfe.
SHOW TRANSCRIPT

Dozens of University of Missouri football players announced a boycott on practices and games Saturday until the school's president resigns or is removed.

Protesters are claiming President Tim Wolfe has been unresponsive to instances of racism on campus.

Wolfe said in a statement the day before the football players' boycott that, "Racism does exist at our university and it is unacceptable," but has made no signs that he will resign.

Protests regarding racism have been growing in numbers and frequency at the University of Missouri over the course of the semester.

In September, the student body president said men in a pickup truck shouted racial slurs at him as he walked on campus.

Students were reportedly outraged when it took the school's chancellor, R. Bowen Loftin, a week to respond to the student president's claim. However, they have not called for his resignation.

In October, a man, believed to have been intoxicated, allegedly harassed African-American students during the Legion of Black Collegians' Homecoming Royalty Court rehearsal.

The person was later identified and removed from the university, with a conduct hearing pending.

Then, protesters blocked President Wolfe’s car during the university’s official homecoming parade. That protest came days after Chancellor Loftin announced mandatory diversity and inclusion training for all incoming students, but one protester told the Columbia Missourian, “We disrupted the parade specifically in front of Tim Wolfe because we need him to get our message."

Earlier this month, graduate student Jonathan Butler started a hunger strike in response to several events, included a swastika being drawn with human feces in a campus dorm.

Wolfe met with Butler and issued an apology for acting as if he "did not care" at the homecoming parade. However, the hunger strike will reportedly end only with Wolfe's removal.

And the athletic department is publicly standing behind the students as well, although some are calling for their scholarships to be revoked.

The football team's record currently sits at 4-5. No announcement has been made regarding the team's upcoming game against BYU on Saturday.

This video includes images from Getty Images, The University of Missouri, Ellise Verheyen and music from Chris Zabriskie / CC BY 4.0.