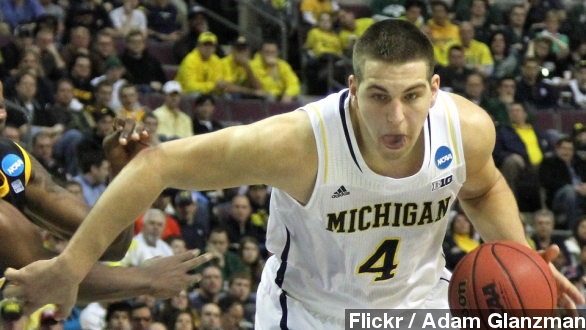 Many expected Michigan star Mitch McGary to leave the Wolverines early to start his NBA career. But we're guessing no one saw this coming.

Friday the 6-foot-10 sophomore forward did announce he's heading to the NBA draft — but after testing positive for marijuana during last month's NCAA tournament. (Via Flickr / Adam Glanzman)

"I made a terrible decision that I do regret. It's hurtful for me, but I want to put it behind me and move past it." (Via CBS)

McGary said in a statement emailed to several media outlets Friday morning: "I tested positive for marijuana. ... We were notified of that result after the Final Four. I regret thoroughly disappointing my family, coaches and administration." ​(Via CBS)

According to Yahoo, if McGary had stayed with the team, he would've faced a one-year suspension from the NCAA for using recreational drugs. So he decided to move on to the draft instead.

As the Detroit Free Press points out, Michigan is not allowed to reveal drug test results without the consent of the student. And Coach John Beilein says he's proud of McGary for publicly owning up to his mistakes.

But despite this new development, McGary will go down in Wolverine history for his spectacular performance in the 2013 NCAA tournament.

The then-freshman helped his team get to the national title game, where Michigan lost to Louisville. He considered heading to the NBA after that but ultimately decided to stay for his sophomore year. (Via Wikimedia Commons / TonyTheTiger)

But since then, a back injury and subsequent surgery prevented McGary from playing all but eight games this season. He was officially out for the season starting in December. (Via YouTube / UMHoops Videos)

And, as MLive.com points out, because of his back problems, "The 22-year-old is projected as being anywhere from a late first round pick to a late second round pick."

But some say it's harsh that the NCAA drug-tested and punished McGary in spite of the fact that he was injured for most of this season and wasn't playing in the 2014 tournament.

A writer for Yahoo notes, "By failing a test administered by the NCAA, rather than his school, McGary was subject to the draconian Bylaw 18.4.1.5.1, which calls for a player to be 'in­eligible for a minimum of one calendar year.'"

McGary told the outlet he didn't think the penalty fit the crime, and Michigan agreed and appealed the decision. But it was, obviously, denied. (Via YouTube / maizeandbluenews)

McGary's departure comes just a few weeks after fellow Michigan sophomores Glenn Robinson III and Nik Stauskas also declared for the draft. Coach Beilein has promised McGary his support and assistance as the player attempts to join the NBA.