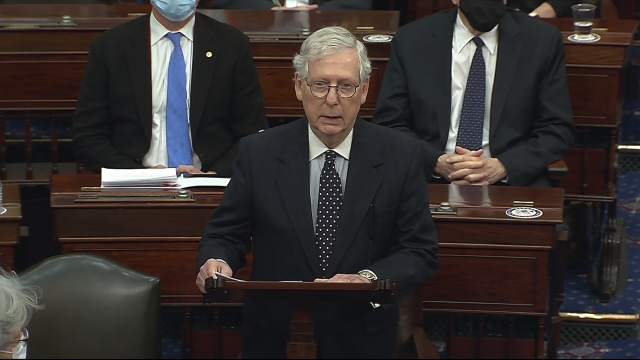 As new details emerge about the violent Capitol riots on January 6, Senate Majority Leader Mitch McConnell said Tuesday that the mob that took part in the insurrection "was provoked by the president."

McConnell continued, "The last time the Senate convened, we had just reclaimed the Capitol from violent criminals who tried to stop Congress from doing our duty. The mob was fed lies. They were provoked by the president and other powerful people and they tried to use fear and violence to stop a specific proceeding of the first branch of the federal government, which they did not like. But we pressed on. We stood together and said an angry mob would not get veto power over the rule of law in our nation – not even for one night."

The Senate is due to start the second impeachment trial of President Donald Trump after President-elect Joe Biden's inauguration.

McConnell is said to be open to impeachment but has not declared how he will vote. He has told other Republicans in the Senate to vote their conscience.

Newsy is committed to keeping you informed on the latest impeachment developments as they unfold. Join us throughout the week for live coverage from the heart of Washington.