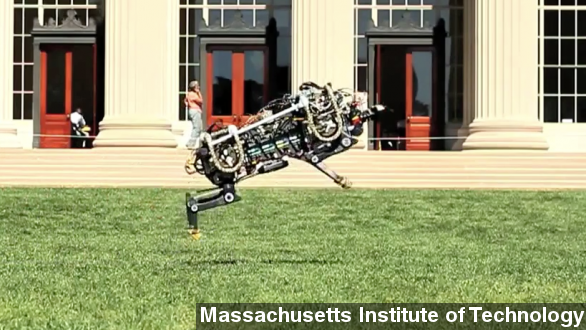 SMS
MIT's Robot Cheetah Unleashed — Can Now Run, Jump Freely
By Amy Kluber
By Amy Kluber
September 16, 2014
MIT developed a robot modeled after a cheetah. It can run up to speeds of 10 mph, though researchers estimate it will eventually reach 30 mph.
SHOW TRANSCRIPT

Modeled after the fastest land animal on Earth, the Massachusetts Institute of Technology's latest update to its robotic cheetah put it one step closer to becoming one of the fastest robo-animals out there.

Funded partly by a military defense agency, MIT researchers began the project in 2013 to compare its running capabilities with the way many world-class sprinters run. They programmed each leg to exert the same amount of force needed for the whole cat to maintain a constant speed.

The current prototype has come a long way from its early days when it had to be leashed. But now it's able to walk — and jump — freely. (Video via Biomimetics MIT)

The researchers say they modeled the robot's motion after a real-life cheetah. And although it runs at just 10 mph now, researchers estimate that speed could eventually reach up to 30 mph. (Videos via Massachusetts Institute of Technology, National Geographic)

That would exceed the current record running speed of the world's fastest human, Usain Bolt.

The researchers say the robot will help develop an understanding of movement, which could be used to develop prosthetic limbs or even replace cars.

Although it's certainly an impressive feat, this isn't the first robot of its kind. Boston Dynamics has developed similar models, also funded by the military.

In 2012, its first cheetah prototype was capable of reaching speeds of more than 28 mph while tethered on a treadmill.

Last year its outdoor model — the WildCat — ran and galloped freely at a speed of 16 mph.

Although MIT's prototype is slower, it does seem to rise above its gasoline-powered competitors in at least one way.

One researcher involved with the project says: "Most robots are sluggish and heavy, and thus they cannot control force in high-speed situations. ... Our robot can be silent and as efficient as animals."

The project was funded by the Defense Advanced Research Projects Agency. The researchers will present the details of their work at a robotics conference in Chicago this week.

This video includes images from Getty Images and the U.S. Marine Corps.