MIT Invention Allows You To Reach Through Screen And Touch Things 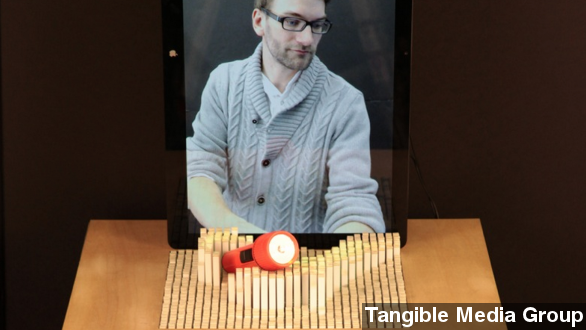 MIT's Tangible Media Group has invented a device that allows the user to turn 3D data into physical representations in real time.

The folks at MIT unveiled a new invention that allows you to reach through a screen and interact with real objects.

It sounds unbelievable, but it isn't. The invention turns 3-dimensional data from the user into physical representations in real time, and all from a remote location. (Via Vimeo / Tangible Media Group)

The device, which was created by MIT researchers and students, is called inFORM.

CNET explains inFORM's " ... grid is powered by an elaborate system of computer-controlled linkages and actuators under the table. Meanwhile, an overhead Kinect and projector deliver data on user motion into the system while casting visual feedback onto the table."

" ... someone on the other end of a video conference call to have a 'strong sense of presence and the ability to interact physically at a distance,' almost as if they were physically there." (Via Boston Magazine)

Valuewalk says the invention could change the way people work, and could eventually mean that everyone would be able to work from home.

" ... the possibility is there. If the resolution of the device is increased, and the device is made more portable, it could be used to allow people with technical knowledge to work from across the world and still have their presence felt."

But don't get too excited about working from home any time soon. There is only one inFORM currently in existence, and researchers say they have a lot more testing to do before the know just what all the machine will be able to accomplish.