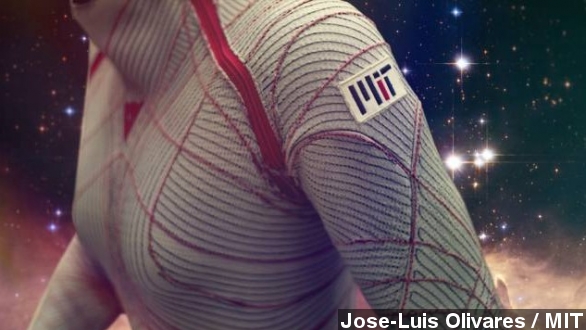 By Christina Hartman
September 19, 2014
The MIT BioSuit could be an alternative to big, bulky traditional spacesuits, but the concept needs some work.
SHOW TRANSCRIPT

It's gotta be hard for an astronaut to move in space. Space suits are big and bulky, in part because they're gas-pressurized. (Video via NASA)

Enter MIT's BioSuit, which NASA helped fund. See how lightweight it looks? The idea is to replace gas pressurization with coils of wire that are actively compressing the material.

Or — as Gizmodo put it — "shrinkwrapping" our astronauts.

It's actually a borrowed technique from this heat-activated robotic worm MIT introduced in 2012.

MIT calls it a "second-skin" spacesuit and explains the coils tighten — and stay tight — when heated to a toasty temperature.

Which begs the question — would the suit overheat the astronaut wearing it? Possibly, but MIT researchers say big battery packs could help counteract that. Then again, that would defeat the mobility advantage of a lightweight suit.

Second option: Researchers could figure out a way for the coils to stay tightened by locking or clipping them in place.

Which is what they're planning to pursue next. So there's obviously some work still to do, but the idea's pretty cool.

This video includes images from Jose-Luis Olivares and music from Broke For Free / CC BY NC 3.0.