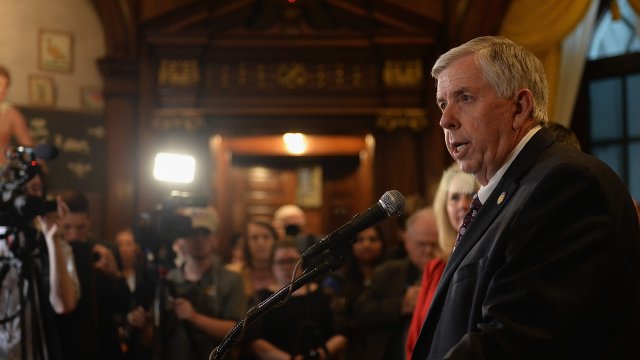 Gov. Mike Parson had already told reporters he supported the Missouri Stands with the Unborn Act.

Missouri's governor has signed a bill that would ban abortion after eight weeks into a pregnancy.

Gov. Mike Parson had already told reporters he planned to put his signature on the Missouri Stands with the Unborn Act. The state's legislature approved the bill last week.

Missouri is one of a number of states that have recently passed stricter abortion laws. Alabama's governor signed a controversial bill that bans abortion at any stage of pregnancy unless the woman's life is at risk or the fetus has a "lethal anomaly." And Georgia's governor signed a bill that effectively bans abortion after a fetal heartbeat is detected, which is usually about six weeks into pregnancy.

A lot of these bills are meant as a direct challenge to Roe v. Wade, a Supreme Court decision that established the right to abortion nationwide. It's highly likely that lawsuits will be filed in each state and that the laws will be blocked by lower courts.