'This Is Not A Witch Hunt': Mo. Lawmakers Call For Governor To Resign 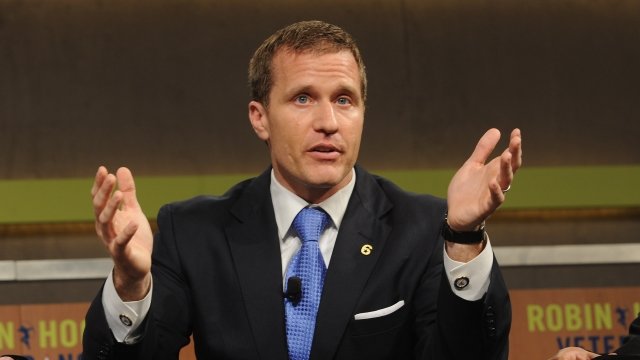 SMS
'This Is Not A Witch Hunt': Mo. Lawmakers Call For Governor To Resign
By James Packard
By James Packard
April 11, 2018
Some Missouri lawmakers want Eric Greitens to step down after they released a report detailing alleged blackmail and sexual misconduct.
SHOW TRANSCRIPT

Missouri's Republican Speaker of the House is responding to Gov. Eric Greitens' claim that the investigation into his affair is a "witch hunt."

"Let me be very clear about this: This is not a witch hunt, and the committee had no political agenda," Rep. Todd Richardson said.

A woman with whom Greitens admitted to having an affair told lawmakers he coerced her into performing oral sex, slapped her and took a naked photo of her, which he threatened to release if she spoke out. The report detailing her testimony was released Wednesday.

"The testimony outlined in the report is beyond disturbing," Richardson said. "To that end, the special investigative oversight committee voted to continue its work to gather additional information that comes to light and also to expand their mission to provide members a recommendation of any and all appropriate disciplinary action of the governor."

Richardson's rebuke of the governor's comments came as the calls for Greitens' resignation grew on both sides of the aisle.