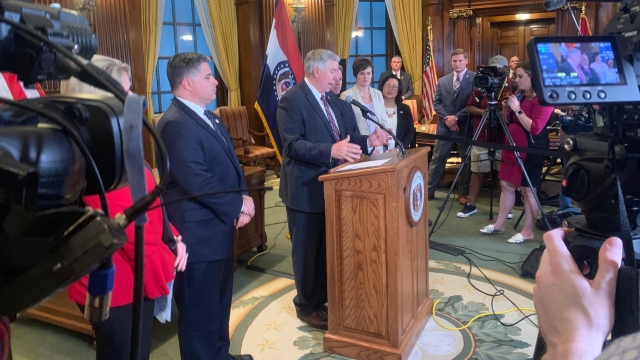 Missouri's House passed a strict abortion bill that would ban abortions after eight weeks into a pregnancy.

The Missouri Stands with the Unborn Act passed Friday, one day after it passed in the Senate. The bill would make it a felony for a doctor to perform an abortion after eight weeks except in cases of medical emergencies. It doesn't include exceptions for rape or incest.

The bill will be sent to Gov. Mike Parson’s desk after leadership from both sides, the House and the Senate, sign the required paperwork. Parson said he intends to sign it.

At a news conference Friday, reporters asked Parson why he feels comfortable signing the bill of it does not include exceptions for rape or incest. This was his response:

Protesters with Planned Parenthood Advocates in Missouri walked through the halls of the capitol building. One protester said she was heartbroken when she heard the House passed the bill.

"This is a complete war on women," Juliann Johnson said. "Like no men should ever decide what is best for women. It should completely be up to us what we do with our own bodies."

Like we said earlier, the bill allows abortion after eight weeks in instances when an individual's health is at risk. But Johnson said it shouldn't just look at physical health, but mental health, too.

"If I were not physically ready to raise a baby, I'm not going to raise that kid properly and he's not going to contribute to society," Johnson said. "He's probably going to live a terrible live if I'm in poverty and there's many women who have severe depression, anxiety, schizophrenia, all these other disorders and I feel like we should be looking at mental health as well as physical health."

Another protester with the same group said "banning abortion will not end abortion."

"It will only end safe and legal abortion," Jessica DeVoto said. "It's just going to result in back alley abortions, which is a point that anyone I've ever talked to who's against abortion only glosses over. Well, that's not a point to gloss over. That's the entire reason we have legal abortion is to prevent that."

Missouri is on its way to joining a number of states that have recently passed strict abortion bills. Alabama's governor signed a controversial bill Wednesday that bans abortion at any stage of pregnancy unless the individual's life is at risk or the fetus has a "lethal anomaly." And last week, Georgia's governor signed a bill that effectively bans abortions after a fetal heartbeat is detected, which is usually about six weeks into pregnancy.

A lot of these bills are a direct challenge to Roe v. Wade, a Supreme Court decision that established the right to abortion nationwide. It's highly likely lawsuits will be filed in each state and that the laws will be blocked by the lower courts.