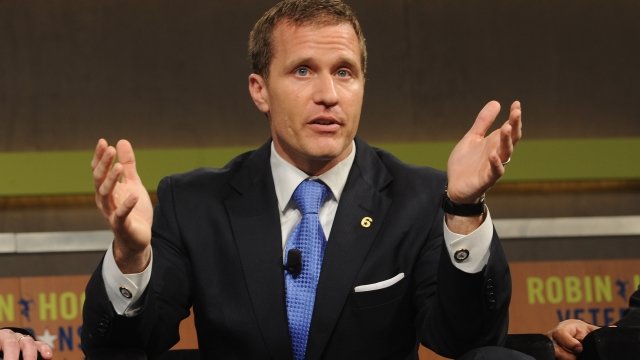 SMS
Missouri Gov. Eric Greitens Charged With Another Felony
By Jake Jones
By Jake Jones
April 21, 2018
Greitens allegedly obtained that list illegally and used it to ask donors for campaign funding. He raised nearly $2 million from those donors.
SHOW TRANSCRIPT

Missouri Gov. Eric Greitens is facing a second felony charge, this one for tampering with computer data.

Authorities are already investigating Greitens for one felony. He's been charged with taking a nonconsensual nude photo of the woman he was having an affair with and threatening to release it if she spoke out about their relationship.

The second charge, announced Friday, relates to a list of donors from a veterans charity he founded. Greitens allegedly obtained that list illegally and used it to solicit campaign donations. He raised nearly $2 million from those donors.

Greitens founded The Mission Continues in 2007 and left the group in 2014. Charity employees have been adamant they did not give Greitens the donor list, as that was illegal and would threaten the organization's tax-exempt status.

Greitens has denied both charges and says he will be proven innocent in court. His criminal invasion of privacy trial is scheduled for May 14.