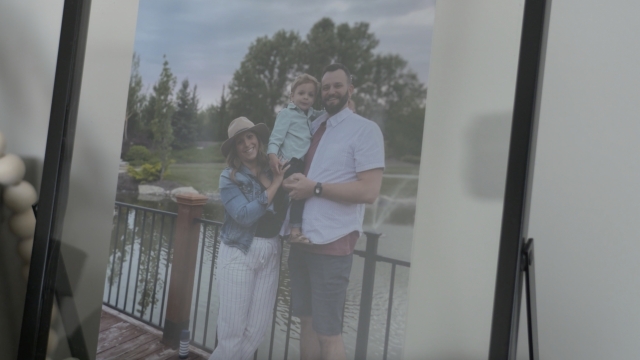 Angela and Justin Orel are settling into their new house in suburban Kansas City, MO with their first child, Avett, and chocolate lab, Lucy.

They moved to a bigger house at the end of last year with hopes of expanding their family, and they got pregnant even sooner than they planned.

"I just went into like a normal OB appointment and found out, so it was kind of exciting," Angela said. "And I was so excited. I just called him by afterwards. And I was like, 'I have news.'"

Everything seemed normal for the first few months of pregnancy. And at 18 weeks, Angela's OB recommended doing a standard test for genetic problems and abnormalities.

"Anything over 35 is considered a geriatric pregnancy, which is a low blow, but that's what they call it. And so I'm 36," said Angela

That's when everything changed.

"We got the call from the OB saying, you know 'Your test is positive, but don't get too alarmed. There's a high false positivity rate with this test. So we'd like you to come back in and just do it again,'" said Angela.

The second test was also positive, and then two specialists confirmed their worst case scenario.

"And that was the spina bifida and basically the physical and mental disabilities. And also on top of that, the craniosynostosis," said Angela.

Their first child, Avett, also had craniosynostosis, meaning his skull fused together too early. But that's fixable with surgery.

The severe spina bifida diagnosis was a different story. It's a major birth defect of the spinal cord, and it often comes alongside hydrocephalus, which is a buildup of fluid around the brain.

"And there was already showing significant signs of that to the point it was actually causing the brain to fall down the spinal column, like into the throat," said Angela.

The damage already done to their fetus' spine was unrepairable.

"Maybe, potentially, they could have some use of their legs to basically being a quadriplegic and anything in between. And we don't know exactly where that was going to be," Justin said. "And that was probably the hardest part. And it was the same with the cognitive impairment, and could be something small that goes along with it. But there certainly would be some because they could already see that some damage had been done."

Initially, they prepared for a drastic change in their family’s life, and they didn't know that an abortion was an option.

"For sure one of us would probably have to quit their jobs and stay at home full time, which we probably wouldn't be able to afford this house. So then we'd have to sell it and not that any of that matters, but it's just like the domino effect," said Angela.

Angela grew up alongside a second cousin with severe spina bifida, so she's seen how living with the disease can impact the whole family.

"She's in her mid 40s now and growing up with her and seeing the struggles of everyday life — it's heartbreaking," Angela added.

That firsthand knowledge, combined with concerns about the quality of life for Avett and their entire family weighed heavily on their ultimate decision to have an abortion.

"Almost, in a way, I felt like we were saving everyone from having to go through that, which I felt was even harder than to terminate when we did," said Angela

"There was no good choice," Justin said. "There wasn't like a right and wrong decision. There was just two [expletive] options."

At about 20 weeks pregnant, they knew they needed to move fast. But they couldn't get an appointment on Kansas or Missouri side of the state line before legal limits kicked in. So they drove across the state to Illinois, but the first clinic they visited was a no-go.

"That particular clinic did not have any anesthesiologist on staff. And so they could not sedate you," Angela said.

"There was no way to tell how much pain you'd experience physically, on top of the emotional trauma that would go with it," Justin added.

They drove four hours back home without getting the procedure done. They got a new appointment at a different location, and the next week drove back across the state again. The medical and travel costs were almost $6,000, and nothing was covered by health insurance.

"None of it was cheap," Justin said. "And I think we count ourselves very lucky that we were able to afford it and be flexible enough with work with both of our jobs, giving us the time off and having family to take care of [our son Avett] while we're gone for a few days."

"I think I'm finally kind of at the point where I'm feeling happier again," Angela said. "I know, we made the right decision for us. I do."

But they still think about the baby they'll never get a chance to meet.