The Mighty Mississippi River Is Drying Out 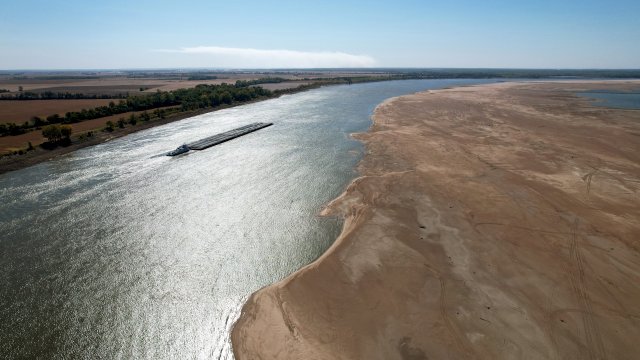 The Mississippi River's water levels are dropping to record lows, mostly in the Great Plains and Midwest.

America's largest river is in trouble. Up and down the mighty Mississippi, water levels are dropping. What used to be the bottom of the river is now massive sand dunes.

The water levels are dropping to record lows. Near Memphis, it's more than 10 feet below where it should be.

The megadrought gripping the U.S. is expanding. Now 59% of the country is in some level of drought.

It's getting worse, mostly in the Great Plains and Midwest. It's increasing there by 60,000 square miles, which is roughly the size of Georgia, and it covers almost all of the Mississippi River's tributaries.

"We have many rivers throughout the country and some in the Southwest in particular that are running very low if not completely dry," Kiernan continued.

Like the Platte River, which runs through Nebraska and empties into the Mississippi. It dropped down to just 2 feet deep last week.

South of St. Louis, the water has disappeared. Tourists can now walk out to Tower Rock, which usually requires a boat ride.

In Baton Rouge, Louisiana, the retreating waters revealed the remnants of a ferry boat that sank in 1915.

Climate change is affecting the U.S. especially strongly in the west. Rivers and reservoirs are experiencing dangerously low levels.

Near the mouth of the river, just south of New Orleans, the water flow out into the Gulf of Mexico is so slow that saltwater is flowing backward into the river, forcing the Army Corp of Engineers to build an underwater levee to stop the salty water from contaminating drinking water supplies.

The low levels are devastating the agricultural industry.

Barges struggling to stay afloat in the low water levels are carrying much less cargo. But many don't have the option; they need to wait for the water to get deeper. And that's hurting Midwest farmers trying to get soybeans, corn and grains to international markets.

"If we cannot deliver affordably, dependably to the foreign customer, that foreign customer is going to find that product somewhere else in the world," Friedmann continued.

And there are limited options to move the product. Each barge container is the equivalent of 134 semi-trucks.

"You're talking thousands — tens of thousands — of trucks that would be necessary to carry that same cargo," Friedmann said. "And there are not that many trucks and truck drivers."

That's why the Army Corps of Engineers is working around the clock, dredging new channels to keep the barges floating, even if they are only partially full — just like the rivers.

"We're going to have to learn to adapt to changing climate," Friedmann said.

And the continuing drop in river levels.