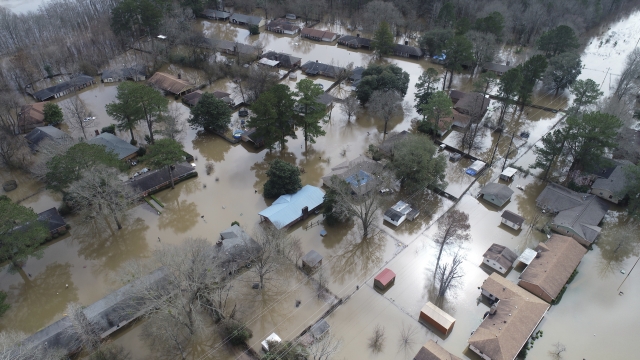 Around 2 million people in central Mississippi are now under flash flood watches as the state deals with record rainfall.

Entire neighborhoods are surrounded by water, as many as 1,000 homes are flooded, and more rain is expected to continue to fall through early Wednesday: Forecasters have predicted up to 2 more inches.

Many residents in hard-hit Jackson had to be rescued as floodwaters filled their homes. As NBC News reports, the state's capital city has already seen its wettest year to date, receiving nearly 20 inches of rain since Jan. 1.

Mississippi Gov. Tate Reeves declared a state of emergency Friday. He called the flooding historic and said this has the potential of "being the third-worst flood in [the] state's history."

Reeves said he's been coordinating with the Mississippi Emergency Management Agency, the state Highway Patrol, Department of Transportation, National Guard and the state Department of Environmental Quality. The state has also sought assistance from Homeland Security, the Army Corps of Engineers and the American Red Cross.

Additional reporting by Rogelio V. Solis and Rebecca Santana of the Associated Press.