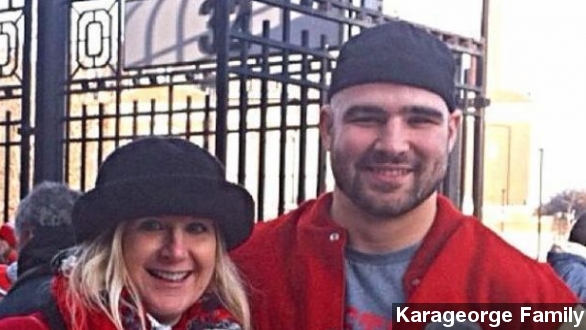 Police Sgt. Rich Weiner told reporters, "We received a call from somebody stating they found a body in the dumpster at this location. ... We are able to confirm ... that it is the body of Kosta Karageorge."

According to the police, the former OSU lineman's body was found in a dumpster one block from his apartment. The investigation is still ongoing, but Karageorge appears to have died from a self-inflicted gunshot wound.

Karageorge had been missing since Wednesday, when he left his apartment after telling friends he needed to take a walk to clear his head. His disappearance sparked a city-wide manhunt for the missing student.

Ohio State issued a statement saying, ​"Our thoughts and prayers are with the Karageorge family, and those who knew him, during this most difficult time."

Karageorge spent three years wrestling for OSU before walking onto the football team this year. He was 22 years old.