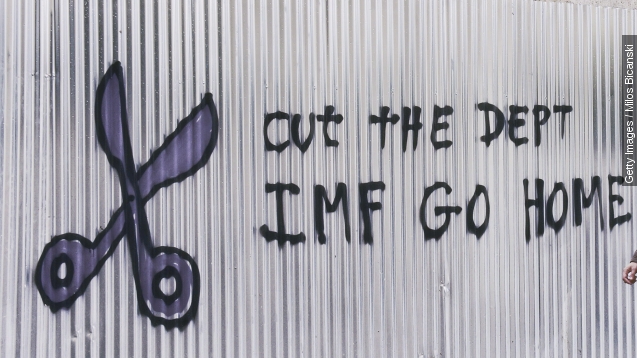 SMS
Missed IMF Payment Puts Greece Into New Territory
By Steven Sparkman
By Steven Sparkman
July 1, 2015
Greece missed its loan payment, becoming the first developed country to fall into arrears with the IMF. But no one knows what the result will be.
SHOW TRANSCRIPT

Greece officially passed the deadline on its 1.5-billion-euro payment to the International Monetary Fund. It's the first "developed" country to do so, and no one is quite sure what will happen next.

"Just about everybody you speak to agrees that we are now in totally uncharted waters," CNN's Richard Quest said.

"Where it goes to from here is anybody's guess," 9News's Ross Greenwood said.

It's not clear what the result of missing the IMF payment will be. The organization's usual response to a missed payment is to send strongly-worded letters for a while.

"This is about like missing a credit card payment. There are consequences, but you do get another chance," BBC's Ros Atkins said.

But Greece is a special case. This is the largest single missed payment in IMF history. The organization said it's already notified its executive board about Greece's tardiness and has cut off the funding tap.

"The immediate worry in Greece is what's happening to its banks," Sky News's Ed Conway said.

Without the IMF's support, it's possible Greece could literally run out of money soon. It's already enacted tight controls on its banks. (Video via Bloomberg)

In the short term, the missed payment doesn't change much. All the focus right now is on Sunday, when Greeks will vote on whether to accept the eurozone's harsh terms for a new bailout or whether to go it alone. (Video via CBC)

This video includes images from Getty Images, Anders Sandberg / CC BY NC 2.0, the International Monetary Fund and Duncan Hull / CC BY 2.0 and music from Podington Bear / CC BY NC 3.0.